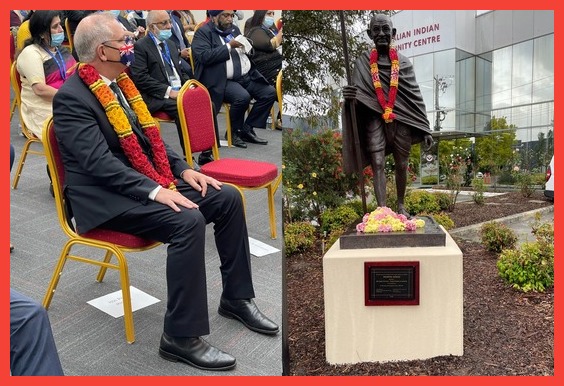 MELBOURNE, 13 November 2021: Mahatma Gandhi has reemerged here after not being able to pass a community consultation some years back by the Greater Dandenong Council. It was proposed to have his statue opposite the Dandenong station and adjacent to the Little India precinct. The veil on the Mahatma’s statue (Made in India) was removed by Prime Minister Scott Morrison as he unveiled it at the Australian Indian Community Centre, Rowville, as rain and winds lashed the area.

Among those present were the Indian Consul General Mr. Rajkumar, Mr. Alan Tudge MP, Member for Aston, Minister for Education and Youth. Others present included Mr. Jason Wood MP, Member for Latrobe, Assistant Minister for Customs, Community Safety and Multicultural Affairs, and Mr. Matthew Guy, Patron of Federation of Indian Associations in Victoria. The hero of the day was Mr. Vasan Srinivasan, Chairperson & Founding Trustee Australia Indian Community Charitable Trust (AICCT) who’s idea it was and is now a reality.

The earlier attempts (2018) to have the Mahatma in Melbourne though failed, the Council had a huge mural of Gandhi painted in Little India, part of the Daniel Andrews government plan to rejuvenate the precinct. Mysteriously the mural, I noticed a few months back, has vanished. One wonders what happened to India’s father of the nation’s mural which could be seen from Mason street. A blank wall now stares at visitors. Anyway, things were forgotten as the pandemic lockouts bruised the area. 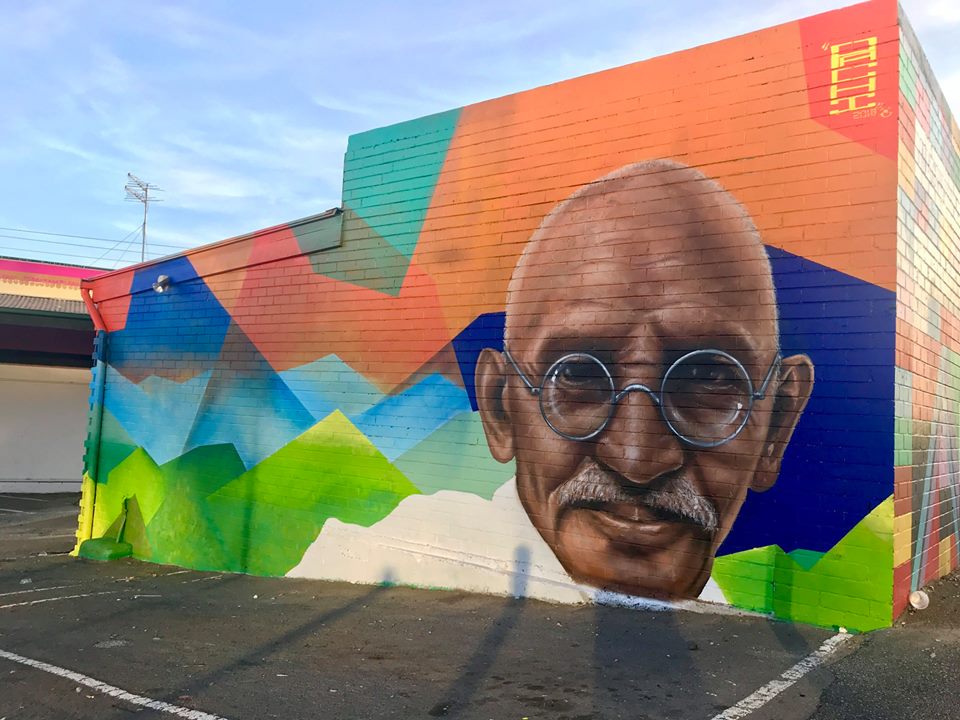 The Gandhi mural that vanished from Little India, Dandenong.

Till this day the Mahatma is missed in Little India. So much for Australia’s engagement with India and Asia. But, now the Gandhi statue in Rowville is a big relief. I am sure every 2nd October (his birthday) and 30th January (his assassination day) people can pay their homage to the apostle of non-violence, who once said, “The greatness of humanity is not in being human, but in being humane.”

In April 2018, The Immigration Museum organized ‘Mahatma Gandhi: An Immigrant’ Digital Exhibition which focussed on Gandhi’s years as a migrant in South Africa and the methods of non-violent resistance he developed during this time. Later, Ela Gandhi, renowned peace activist and granddaughter of Mahatma Gandhi visited Melbourne to view the exhibition. The exhibition was supported by the Victorian Government and the Deakin University. It was a big success, indicating the interest Melbournanians have in Gandhi.

Video-SAT/NN (Text of video below)

In his address,” Gandhi’s life is his message, a message that endures. It’s not a whisper from the past, but a teaching embedded in the hearts of millions around the world and reflected in every respect of this building, every aspect. So, congratulations, and I win, I wish, I should say, this centre a long and illustrious life, but more importantly, I wish the vibrancy of this community every success,” PM Scott Morrison concluded.

Talking to SAT, Mr. Vasan Srinivasan disclosed, ” The Australian Indian Community Centre will organize a series of lectures on Gandhi, his life and way of thinking from 30 January 2022 with prominent Gandhian’s participating in the program.”