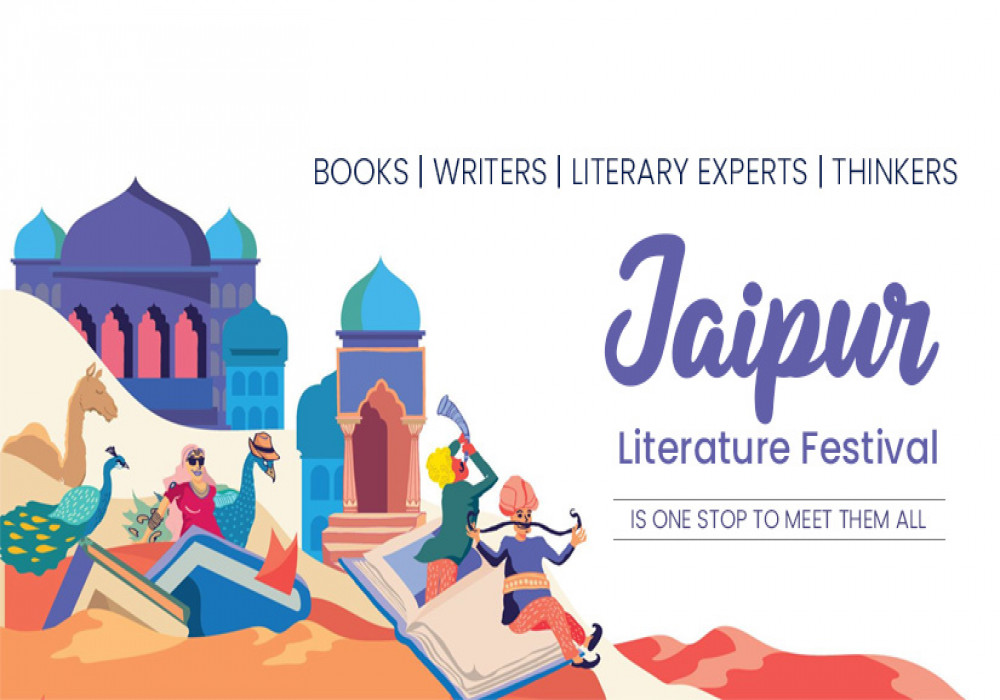 MELBOURNE, 9 February 2021: The iconic 14th Jaipur Literature Festival 2021, is all set for a new paradigm shift this year with it’s new virtual personality. Scheduled from 19 to 21 February and 26 to 28 February 2021, Teamworks Arts, the Festival Producer have curated an exceptional online program that will create the original literary extravangaza with augmented reality and virtual venues replete with a bookstore, a bazaar featuring traditional handcrafted goodies, and various engagement zones.

In its ability to reach out to geographies across the world,he online edition of the iconic Festival will actually be a dream-come-true for many who have craved to be at Jaipur every January in the last 14 years. In its milestone online edition, the Festival aims to be even wider in its reach and longer in duration covering two extended weekends.

The first list of speakers released today includes former South African Constitutional Court Justice Albie Sachs, a distinguished lawyer, anti-Apartheid activist, scholar & author; Bibek Debroy, writer, translator, Sanskrit scholar and Chairman of India’s Economic Advisory Council to the Prime Minister whose recent books include the translations of Bhagavata Purana and the Markandeya Purana; Carlo Rovelli, renowned theoretical physicist and bestselling author of Seven Brief Lessons on Physics, The Order of Time and the recently released Helgoland; Daniel Simpson, Yoga philosopher & author of The Truth of Yoga, a comprehensive guide to the history of practice; John Zubrzycki, an Australian journalist, researcher and author of The House of Jaipur: The Inside Story of India’s Most Glamorous Royal Family; Marina Wheeler, British lawyer, columnist and author of The Lost Homestead: My Mother, Partition and the Punjab; Michael Sandel, American political philosopher, Harvard University professor and author of The Tyranny of Merit: What’s Become of the Common Good?

The list continues with Moin Mir, author of Surat: Fall of a Port, Rise of a Prince: Defeat of the East India Company in the House of Commons, which traces the annexation of Surat; Moni Mohsin, famous for writing the long-running satirical column ‘The Diary of a Social Butterfly’ for The Friday Times and author of The Impeccable Integrity of Ruby R; Navtej Sarna, author, columnist, and former diplomat and India’s Ambassador to the United States; Oliver Craske, author of the biography Indian Sun: The Life and Music of Ravi Shankar; Prasoon Joshi, celebrated poet, writer, lyricist and screenwriter and Chairperson of India’s Central Board of Film Certification; Priya Atwal, a historian of the empire, monarchy & cultural politics in Britain and India and author of Royals and Rebels: The Rise and Fall of the Sikh Empire.

They will be joined by Ramachandra Guha, eminent Indian author, historian and biographer; Ranjit Hoskote, Indian poet, art critic, cultural theorist and independent curator; Sarbpreet Singh, author of The Camel Merchant of Philadelphia and Night of the Restless Spirits; Shashi Tharoor, politician, and celebrated Indian author whose recently released book is titled The Battle of Belonging; Shekhar Pathak, Himalayan traveller and historian whose recent works include Hari Bhari Umeed and The Chipko Movement: A People’s History; Shylashri Shankar, Senior Fellow at the Centre for Policy Research in New Delhi and author of Turmeric Nation: A Passage Through India’s Tastes; Krish Ashok, author of Masala Lab: The Science of Indian Cooking; Simon Winchester, New York Times best-selling author of The Professor and the Madman and The Perfectionists: How Precision Engineers Created the Modern World; Steve Brussate, American paleontologist and evolutionary biologist and author of The Rise and Fall of the Dinosaurs.

Namita Gokhale, writer, publisher, and Co-director of the Jaipur Literature Festival, said, “The Jaipur Literature Festival 2021 will appear in an exciting virtual avatar, with great writers and stellar speakers from around the planet reaching out to readers and JLF enthusiasts everywhere. These disruptive times have enabled us to curate a uniquely diverse literary platform , and to create what could be termed a living library. The magical spirit of the festival, with its joy, curiosity, and sense of wonder, will be live this coming February for all those who cherish books, ideas and dialogue.”

William Dalrymple, writer, historian and Co-director of the Jaipur Literature Festival, said, ” Despite pandemics and political upheavals around the world, the Jaipur Literature Festival continues to spread its wings and has transformed itself into one of the world’s most popular online spaces for profound discussions about books and writing. While this year’s Jaipur will be a quieter affair than usual, our commitment to literary excellence continues undimmed as we present one of our most extraordinary lists to date.”

Sanjoy K. Roy, Managing Director of Teamwork Arts who produce the Jaipur Literature Festival, said, “The devastation that the pandemic caused caught the world unawares. Even as gated communities, cities and countries shut down their borders, we wanted to ensure the free flow of knowledge and information across countries and communities. JLF Brave New World was born out of this intention and grossed over 160 episodes and 4.8 million viewers. As we look ahead to 2021, we look forward to hosting the Jaipur Literature Festival, bringing to our viewers the best thinkers from across the world and presenting varied points of views and themes.”

Jaipur BookMark (JBM), the B2B arm of the Festival will open its eighth edition with an engaging virtual programme between the two weekends of the main Festival. The virtual edition of JBM will run from 22nd to 25th February 2020 hosting two sessions per day. JBM will continue to bring together a wide range of publishers, literary agents, writers, translators, translation agencies and booksellers from across the world and give them an opportunity to exchange ideas and listen to major global industry players.

In addition to enjoying the literary sessions, audiences will also get to savour the Festival’s signature morning and evening music sessions with performances by leading artistes and virtuosos. The customary Festival merchandise and books by participating authors will be available online on the Jaipur Literature Festival’s official website- jaipurliteraturefestival.org