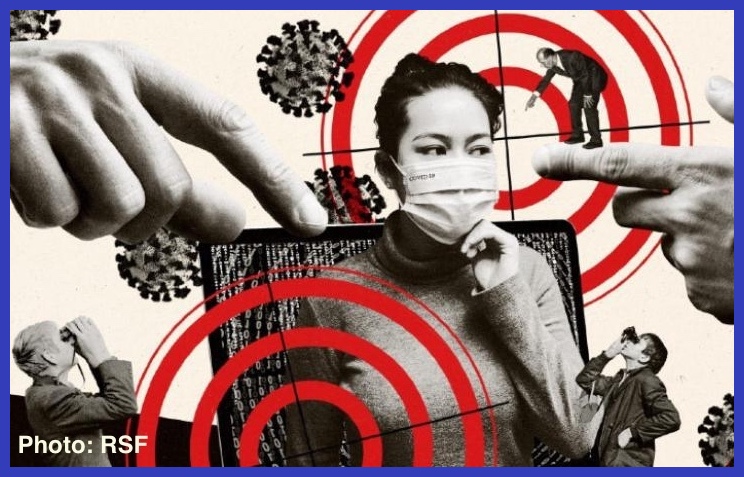 By Reporters Without Borders (RSF)

Covid-19 was declared a worldwide pandemic by the World Health Organization (WHO) on 11 March, since then it has been used as a pretext by governments to put constitutional guarantees on hold. Now that relative calm appears to be in prospect, it is imperative that these exceptional measures be lifted.

Faced with the unprecedented epidemic, many governments have targeted those whose job is to inform the public. Emboldened by the emergency, the spread of repression has been translated into a substantial armoury of laws, regulations and emergency measures. Attacks on press freedom and special regulations have proliferated on all five continents. They cover a range of restrictive procedures, from minor obstacles to custodial prison sentences.

“The coronavirus health crisis has aggravated all other crises and has had a particular impact on journalism and the right to information,” said Christophe Deloire, secretary-general of Reporters Without Borders (RSF). “The worst regimes have resorted to all means at their disposal to crack down even harder and, when these prove insufficient, they have brought in new ones using the excuse of an emergency or exceptional circumstances. It is now time to put an end to such exceptional measures urgently and to unshackle information!”

Some countries, such as Honduras, took steps straightaway to limit freedom of expression, others (Brazil) to curb access to information or its publication, although some have since been rolled back, as is the case in Hungary. Prime Minister Viktor Orbán brought in emergency coronavirus legislation allowing him to rule by decree for an indefinite period and setting a sentence of five years’ imprisonment for publishing false information. The law is due to be repealed around 20 June.

In El Salvador, Thailand and Armenia, curbs on journalists’ movements, the imposition of a curfew and of tracking mechanisms were causes of concern and were ultimately scrapped. Some governments, such as Namibia, used the opportunity to restrict attendance at press conferences.

Elsewhere, access to information was strictly controlled. Bangladesh’s Bangabandhu Sheikh Mujib Medical University, the country’s only medical school, published a memo to teachers, doctors and staff banning them from speaking to the media on any health matter without prior permission. The memo said they must refrain from tarnishing the image of the government and universities.

In Greece, the health ministry published a decision on 13 April banning hospital staff from talking to the media and Greek journalists were required to have government permission before reporting inside hospitals.

Public service media organizations have often come under intense government pressure. In Japan, an emergency law (repealed on 25 May) added the public broadcaster NHK to a list of institutions to which the government is able to give “instructions”. In Ukraine, pressure on public service news providers took a more insidious turn when the public broadcaster PBC was stripped of a quarter of its budget.

Most frequently, legislative measures have been taken on grounds of the emergency allowing outright censorship of alarming or disturbing information. In Cambodia, the government gave itself the legal power to ban the publication of “any information that could cause unrest, fear or disorder”. In Vanuatu, any information about Covid-19 must be officially approved before publication.

Most governments yielded to the temptation, using a variety of repressive measures according to the democratic traditions and the rule of law in each country, of making official channels the only credible and authoritative sources of information.

In India, Egypt, Botswana and Somalia, for example, only government statements on the subject may be published. In Eswatini, using printed and electronic media to obtain information about Covid-19 is banned without prior the permission of the health ministry.

Alongside these repressive measures, the arsenal of sanctions has been hugely expanded. The weapons of repression against individual journalists as well as news organizations have been greatly strengthened in many countries: seizures and publication bans (Kyrgyzstan), heavy fines (up to 25,000 euros in Russia) and deterrent prison sentences (up to six months in South Africa, 18 months in Indonesia, five years in Botswana and Algeria and up to 20 years in Zimbabwe).

In Liberia, the justice authorities have threatened to close down or seize any news organization that publishes what they consider to be false information. In Romania, the government’s crisis unit leapt into action, closing down 12 news websites. In Myanmar, 221 sites were closed, including news sites aimed particularly at the country’s ethnic minorities.

Apart from this tidal wave of obstacles and sanctions, one of the most worrying aspects of the Covid-19 crisis has undoubtedly been the pernicious use by governments of the notion of disinformation and “fake news”.

In Ethiopia, the definition of misinformation is so broad that it gives the authorities the discretionary power to declare any piece of information false. In Bolivia, 37 “political actors” have been convicted in summary proceedings of “disinformation and destabilization”.

In Russia, the definition of disinformation and the damage it is alleged to cause are the unique preserve of judges. On 21 April, the supreme court extended this to social media, and even to individual conversations. In Egypt, the Supreme Council for Media Regulation has asked that ordinary citizens report the publication of “fake news” about Covid-19. The implementation of these emergency laws often shows a broad acceptance of the idea of fake news. They are also used to deter criticism and muzzle the opposition.

WHO suspends supply of BharatBiotech’s COVAXIN® to UN agencies