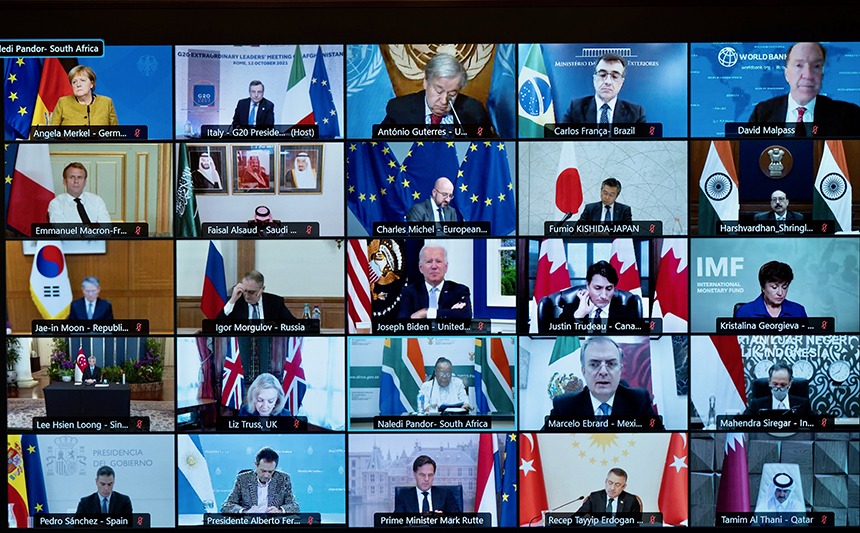 MELBOURNE, 13 October 2021: The G20 countries have agreed to deal with the issue of humanitarian aid to Afghanistan through the United Nations and involving the ruling Taliban in Kabul. The decision was taken at an Extraordinary Meeting of G20 Leaders on Afghanistan held on 12 October 2021 via video conference.

The meeting called at the initiative under Italy’s Presidency of the G20 at the initiative of President of the Council of Ministers Mario Draghi stopped short of recognizing the Taliban regime which took power in Kabul after US and allied troops left the country on 15 August 2021.

The G20 meeting was not attended by the Russian President, Chinese President, UK Prime Minister, and the Indian Prime Minister. Russia and China had their foreign ministers present. India was represented by its foreign secretary Harsgvardhan Shringla.

Moscow has called a rival meeting on Afghanistan on 20 October, where the Taliban have also been invited.

Seventy-five percent of Afghanistan is foreign-aid dependent and billions of its bank assets in overseas banks have been frozen by the United States. What happens to these assets is not clear but aid from the European Community, IMF, and the World Bank looks certain.

The G20 meeting decided on Shared Goals and Principles and Lines of Action. These include respect for human rights, education for kids and girls and the country should not be a safe haven for terrorists. And, to allow safe passage to Afghans who wish to leave the country, Keep the Kabul airport open, and continuation of the COVAX facility for Covid-19 vaccinations in the country.

Read the Chair’s Summary of the meeting: https://www.g20.org/wp-content/uploads/2021/10/ChairsSummary.pdf

Meanwhile, the Taliban Foreign Minister in Doha has called upon the release of Afghanistan’s $ 9 billion assets frozen overseas and said “Instead of pressure, the world should cooperate with us.”, reports The Guardian.

Press Conference of the G20 Extraordinary Leaders’ Meeting on Afghanistan