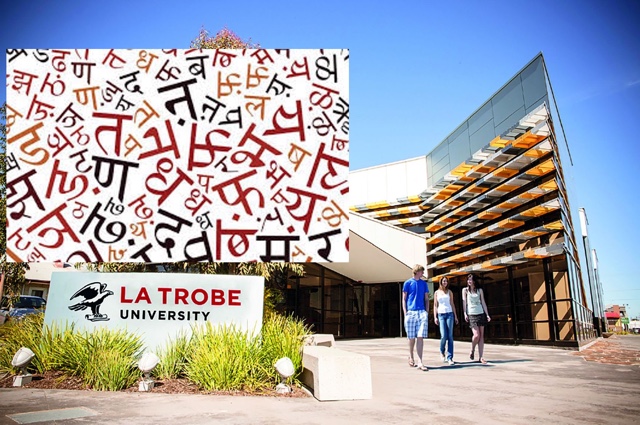 MELBOURNE, February 2021: The La Trobe University has decided to retain its Hindi teaching. The official decision in this regard was announced on Monday (8 February 2021), by an email from Prof Nick Bisley, Dean of Humanities and Social Sciences, College of Arts, Social Sciences and Commerce, La Trobe University. The Prof said, ” After considerable discussion with stakeholders including staff, students, community groups, and governments we have decided to retain the current Hindi program.”

“Notwithstanding the significant financial challenges we face, it is clear to us that it remains firmly in the University and country’s interest to retain the Hindi program”, he said.

Talking to South Asia Times (SAT), Ian Woolford, who teaches Hindi at the La Trobe University said, ” It’s extremely wonderful news that the university will continue to support the Hindi program because the recognition of Hindi language is vital to Australia’s national interest. So, Hindi remains part of the curriculum.”

” I am grateful to the Hindi Action Group, the community, those in academics, staff, and all others around Australia who waged the three-month-long effort to retain Hindi at the La Trobe University,” he said.

Vikrant Kishore of the Hindi Action Group says, ” It is heartening to know that Hindi program at La Trobe University will be retained. I would like to thank the La Trobe University VC and Executive members for taking into consideration the massive support of the Australian-Indian community, who were very concerned regarding the proposed removal of the Hindi program, that led to a hugely successful signature campaign, and letters of support from many politicians, community groups, and academics across the world. I am sure La Trobe University will benefit immensely by retaining the Hindi program, and we as a community will take a keen interest to support the program and spread the word around. I was fortunate to work along with the HINDI ACTION GROUP, where eminent Australian Indian academics, journalists, artists, and business representatives – such as – Neeraj Nanda, Deepak Joshi, Saksham Katyal, Priya Chacko, Manoj Kumar, Arun Sharma, Mohamed Haroon, Rampal Muthalya, and Intaj Khan helped to liaise with the community members to raise support for the Hindi program.”

” Our support for the Hindi program at La Trobe University was solely on the following reasons: 1. Supporting the largest spoken language of India, 2. to make stakeholders understand the importance of soft-cultural power and diplomacy through language (in this case Hindi, but our passion, is and will remain the same for any language group, or sub-group from India, and we must add that we also support and respect all other languages, thus we made sure that we also include saving Greek and Indonesian languages at La Trobe in our communications), 3. Due importance to language courses at University level must be given, 4. The community must work together to take forward the Australia-India relations beyond Bollywood and Cricket, and finally, 5. Indian being a key partner of Australia, and Indian diaspora forming the third largest migrant group, it is high time that we acknowledge that partnership, and move beyond tokenism.” says Vikrant Kishore.

The issue had become a hot potato in the community as the ‘Hindi Action Group’ spearheaded a campaign against the proposed plan of the La Trobe University to scrap Hindi teaching, citing the pandemic fall in revenue and dwindling student numbers.

The ‘Hindi Action Group’ managed to do a massive signature campaign and talked to the Federal Education Minister on the issue. The university was impressed to retain the Hindi teaching as part of Australia’s expanding relations with India. Big support also came from academic circles on the issue.