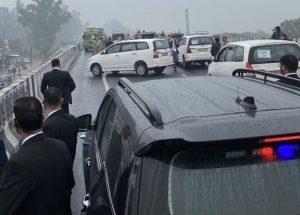 The Indian Prime Minister Narendra Modi’s visit to Ferozepur, Punjab on Wednesday (5 January 2021) was canceled after his motorcade could not proceed as the road was allegedly blocked by protesting farmers. The PM was proceeding for a two-hour road journey from Bhatinda after he could not go by helicopter because of bad weather. He was to visit the National Martyrs Memorial in Ferozepur.

India’s Ministry of Home Affairs (MHA) has called the incident a “security lapse”, reports The Hindu. A Tweet by the MHA says the PM’s travel plan and the schedule were communicated to the state government.

The PM’s schedule and travel plan was communicated well in advance to Punjab Government. As per procedure, they have to make necessary arrangements for logistics, security as well as keep a contingency plan ready. @HMOIndia @PIB_India pic.twitter.com/sxwChdzJxX

ANI reports, the MHA has sought a detailed report from the State government, asked it to fix responsibility for the lapse, and take strict action.

ANI adds: The Home Ministry said in a statement that PM Modi landed at Bathinda on Wednesday morning from where he was to go to the National Martyrs Memorial at Hussainiwala by helicopter.

Due to rain and poor visibility, the Prime Minister waited for about 20 minutes for the weather to clear out.
The statement said that when the weather did not improve, it was decided that he would visit the National Martyrs Memorial via road, which would take more than two hours. The Prime Minister proceeded to travel by road after necessary confirmation of necessary security arrangements by the DGP Punjab Police.

Around 30 km away from the National Martyrs Memorial in Hussainiwala, when the Prime Minister’s convoy reached a flyover, it was found that the road was blocked by some protestors.

The Prime Minister was stuck on a flyover for 15-20 minutes.

“This was a major lapse in the security of the Prime Minister. The Prime Minister’s schedule and travel plan were communicated well in advance to the Punjab Government. As per procedure, they have to make necessary arrangements for logistics, security as well as keep a contingency plan ready,” the statement said

“Also in view of the contingency plan, the Punjab Government has to deploy additional security to secure any movement by road, which were clearly not deployed. After this security lapse, it was decided to head back to Bathinda Airport,” it added.
Government sources said what was witnessed on the flyover was “a surprising scene of connivance between Punjab police and so-called protestors”.
They said only Punjab police knew the precise route of the PM and “never has such police behavior been witnessed”.

The Tribune reports Ferozepur DIG Inderbir Singh and SSP Harmandeep Singh Hans were to receive him in Ferozepur district but 200 protestors blocked the road, sources said.

Central Minister Smriti Zubin Irani blamed the Punjab government for the PM’s canceled visit. Congress spokesperson Randeep Singh Surjewala says there was no breach of security during the PM’s visit to Punjab and the visit was canceled because of weak support for the proposed rally where he was going.

A report in The Hindu says, ” Farmers have been opposing Modi’s visit to Ferozepur. Bhartiya Kisan Union (Ekta Ugrahan), one of the largest farmer outfits in Punjab, was at the forefront of the protest against his visit and its members were seen demonstrating and blocking roads at several places across the State.”