‘Quad’ leaders bat for ‘free & open’ Indo-Pacific; warn against use of Afghan territory for terrorism 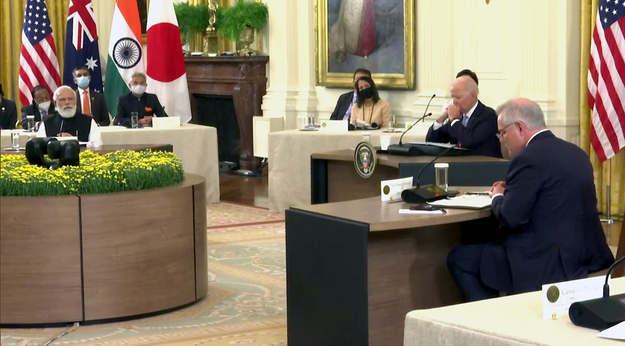 WASHINGTON/MELBOURNE, 26 September 2021: Quad leaders, US President Biden, Australian Prime Minister Scott Morrison, Indian Prime Minister N. Modi, and Japan Prime Minister Yoshihide Suga have in a joint summit communique called upon for a ‘free and open Indo-Pacific, directed at China, though it is not named. The leaders’ summit on Friday (24 September 2021) in Washington DC, discussed many issues including the COVID-19 pandemic, the climate crisis, and critical and emerging technologies.

The Quad also welcomed India’s announcement to resume exports of safe and effective COVID-19 vaccines, including to COVAX, beginning in October 2021. On the climate front, the Quad countries decided to work together for successful outcomes at the COP26 and G20 that uphold the level of climate ambition and innovation. It announced the launch of Quad Principles on Technology Design, Development, Governance, and Use that to guide not only the region but the world towards responsible, open, high-standards innovation.

The communique says, “In South Asia, we will closely coordinate our diplomatic, economic, and human-rights policies towards Afghanistan and will deepen our counter-terrorism and humanitarian cooperation in the months ahead in accordance with UNSCR 2593. We reaffirm that Afghan territory should not be used to threaten or attack any country or to shelter or train terrorists, or to plan or to finance terrorist acts, and reiterate the importance of combating terrorism in Afghanistan. We denounce the use of terrorist proxies and emphasized the importance of denying any logistical, financial or military support to terrorist groups which could be used to launch or plan terror attacks, including cross-border attacks. We stand together in support of Afghan nationals, and call on the Taliban to provide safe passage to any person wishing to leave Afghanistan, and to ensure that the human rights of all Afghans, including women, children, and minorities are respected. 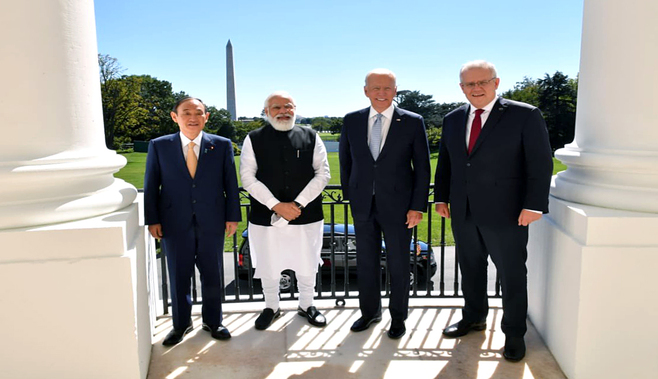 Quad leaders at the summit.Photo-ANI

The communique concludes: ” At a time that tests us all, our commitment to realize a free and open Indo-Pacific is firm, and our vision for this partnership remains ambitious and far-reaching. With steadfast cooperation, we rise to meet this moment, together.

China had reacted sharply against the recently formed AUKUS, comprising of the United States, Australia, and United Kingdom. A pre Quad meeting article in the Global Times said, ” While the Quad mechanism is engaged in splitting Asia and instigating various forces to contain China if Japan, India and Australia went too far in following the US strategy of containing China, they will become cannon fodder as China will resolutely safeguard its interests, Chinese analysts warned.”

China’s reaction to the Quad leaders’ communique is awaited.