MELBOURNE, 24 March 2022: The area on both the sides of Foster Street and Mason Street in Dandenong’s ‘Little India’ is the colorful ethnic Precinct selling Indian/South Asian food, men and women’s garments, groceries, decorating items, bridal outfits and sweets. Anyone passing by cannot miss the aroma of curries, samosas and Chole-Bhutare. This exclusive ethnic shopping enclave has been a cultural outpost for migrants from the Indian subcontinent.

It’s also been in the news for some years for ‘redevelopment’ plans, controversial and often taking political overturns. The traders opposed it or resented ‘redevelopment’ with the prospect of losing embedded businesses. The issue started off when the Libs with Premier Ted Bellieau were in power and the current Premier Daniel Andrews was the leader of the Labor opposition. Daniel Andrews came down to Little India and there was a traders rally at the Victorian Parliament over what the traders called proposed dislocation. Later the Liberal state government gave six months rent-free gift to the traders. Much water has flown down the Yarra since then.

The whole area including current Little India’s Master Plan for redevelopment is ready and submitted for approval under the Revitalising Central Dandenong (RCD) project initiated by Development Victoria and the Victorian Government. The RCD consists of 170 acres of land and Sites 11-15 will be developed by Capital. Alliance. It has five land parcels, bounded by Halpin Way to the north, Thomas Street and Cheltenham Road to the east, the rail corridor to the south and Settlers Square and Dandenong Station to the west. Basically, the Stage 1 project will constitute Little India, Large-scale retail, Food & Market Hall, residential & Commercial. This will take three years to construct (from the end of 2023 to 2026). In total, there will be seven stages – Stage one (Dec 2023- Dec 2026), Stage two (March 27- Nov 29), Stage three (Oct 29 – Dec 31), Stage four (Jan 32 to March 34), Stage five (Feb 34 – Aug 36), Stage six (Feb 37 to June 39) & Stage seven (May 38- Feb 41). So, the $ 600 million development is likely to take around 18 years to complete.

Member for Dandenong Gabrielle Williams says, “We’re turning this area into a vibrant new neighbourhood with more jobs, housing, entertainment, restaurants and spaces that will be enjoyed by locals well into the future.” 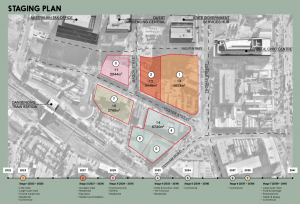 Capital Alliance Group says the streetscape/landscape of the project will have Water expression & capture, Urban greening and canopy cover, User experience and movement, Place and building activation, and place-based environmental performance. These structuring principles provide the framework for future Central Dandenong to ensure that it has the adaptive and climate-resilient infrastructure, a focus on the human scale, the granularity of great urban spaces, connectivity to the broader community, and public spaces that retain the connection to a deep sense of place. The cultural ambiance of the Little India section of the project is an important segment of the master plan.

The Capital Alliance Group has had information sessions with the two bodies of Little India traders. The community briefing session on 23 March 2022 was attended by this correspondent where the masterplan and photos of the proposed project were displayed. Some important information extracted was that the Masterplan will include 470 new residential dwellings, 2,500 m (square) of public open space, community building for housing activities, functions and exhibitions and 483 on-street parking spaces.

Capital Alliance Founder and Chief Executive Mohan Du says, ” We’re proud to share this draft master plan with the community to rejuvenate central Dandenong – with the project to benefit generations to come.”

A reliable source says existing Little India traders have been promised priority in the Little India part of the project, but there is no written assurance. And, the lease rates will be determined by the ‘market’. So, how many will be able to afford them remains to be seen, as compared to the low lease rates now prevailing. How much will a shop/business cost in the new Little India remains a mystery?

Talking to South Asia Times (SAT) Mr. Vasan Srinivasan says, ” It’s sad what has happened to Little India. Premier Brumby’s view was that we should have for Indians like the China Town in the city. It is disappointing the current government is not taking Brumby’s vision.

“Traders and their families will suffer because many have taken loans on their properties to run the business. Their mortgage is at risk. Plus, some self-proclaimed Indian leaders were not helpful in giving strength to Little India.”

“The biggest fear is many of the traders will not be able to afford the commercial lease when the new Little India comes up”, he said.

Minister for Transport Infrastructure Jacinta Allan says, “We encourage locals to have their say on the draft masterplan and will continue to work with them on progressing this project – which will transform Dandenong and create thousands of jobs at a time our community needs them most.”