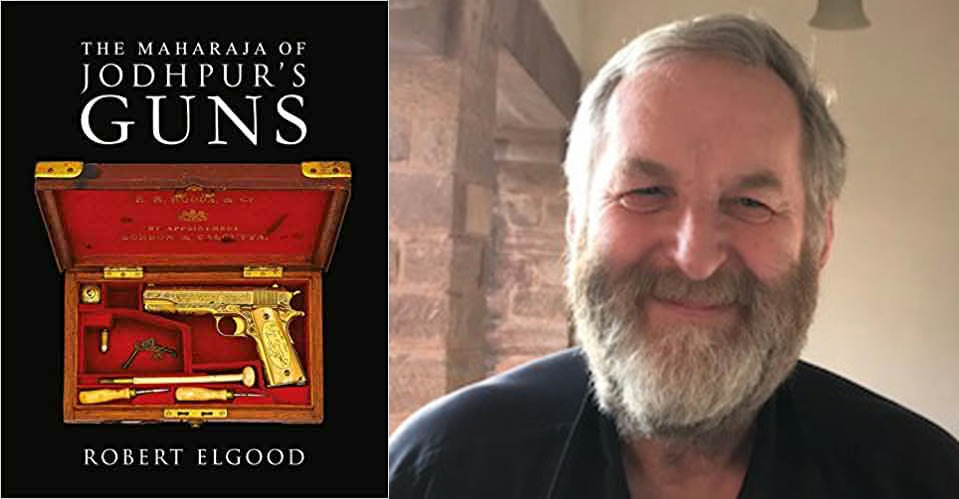 When an international arms historian discovers the famous Indian firearms in a book with a focus on the legendary Jodhpur collection, it ought to be stimulating. Jodhpur was one of the most important military states in Rajasthan, playing a major role in the subcontinent’s history. During the reign of Maharaja Ajit Singh (1678-1724), large numbers of guns were purchased when his daughter married the Mughal emperor.

Today, Jodhpur owns the best Indian matchlocks in the subcontinent, much admired at the Delhi Durbar in 1911. Successive maharajas have only added to the collection. All this and much more is chronicled in this magnificent book ‘The Maharaja of Jodhpur’s Guns’ (Niyogi Books, New Delhi). Robert Elgood’s book is a deeply researched one and, in unison, looks like a silken coffee-table book.

Fellow of the London Royal Asiatic Society and the Society of Antiquaries, Elgood is an expert on the historic arms of Hindu India and the Islamic world. Author or editor of many books – the major ones being ‘Islamic Arms and Armour, Arms and Armour of Arabia’, ‘Firearms of the Islamic World in the Tareq Rajab Collection, Kuwait’, ‘Hindu Arms and Ritual, The Arms of Greece and her Balkan Neighbours in the Ottoman Period’, ‘Arms and Armour at the Jaipur Court and Rajput Arms’ and ‘Armour: The Rathores and their Armoury at Jodhpur Fort’–Elgood is a DPhil in Indian Anthropology from Oxford and has worked at Sotheby’s and the Wallace Collection besides an independent consultant at various major museums. 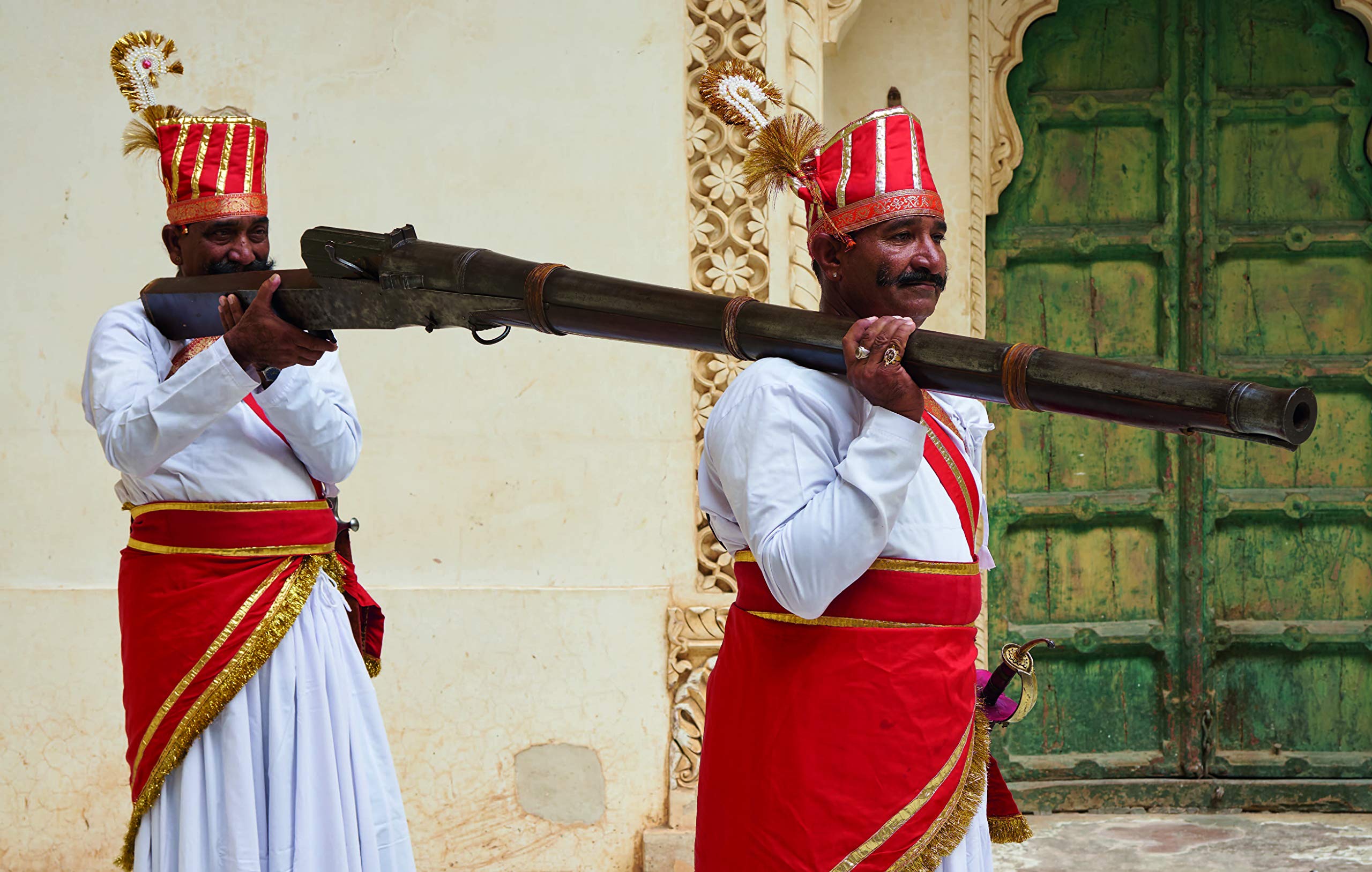 As the blurb says, in 1972, Maharaja Gaj Singh of Jodhpur-Marwar transformed the Mehrangarh Fort into a Rajput museum and cultural center, and the present book is part of the exposition. In the book, Elgood explores the history of gunpowder and firearms in India. It has a detailed description of the firearms as they have evolved in the subcontinent.

Pages transcribed from the 1926 hunting diary of Maharaja Umaid Singh, and a catalogue of his sporting guns are the other highlights of this splendid book on munitions. The section on hunting with spear and gun in Rajasthan makes for a fascinating read.

Among the weapons mentioned in the book is the disguised.22 pen-pistol, one invention of Maharaja Hanwant Singh of Jodhpur. His son Gaj Singh II says the maharaja took his passion for guns to a different dimension; setting up a gun factory in Mehrangarh Fort and designing his own firearms. The maharaja made pencil guns in his workshop and gave some to friends.

Anecdotes are plentiful in the book. For example, Elgood mentions an incident when Maharaja Hanwant Singh had one of these ‘pens’ in his pocket when he once went to a meeting in Delhi. The maharaja believed that the British officer–in actuality, V P Menon, political advisor to Lord Mountbatten – was expecting him.

Elgood writes in the volume: ‘The maharaja became extremely irritated at being kept waiting and finally, when admitted to Menon’s office, pulled out the pistol and in mock anger threatened to shoot him. Mountbatten walked in on the scene. The maharaja explained that he was showing his new invention to Menon and gave Mountbatten the pistol as a gift.’ After Mountbatten’s death, the pistol was auctioned at Holts in 2010 and was bought by a private collector.

The author discusses the worldwide medieval diffusion of firearms technology and Arab, Ottoman, European and Chinese influences on the development of Indian firearms. Elgood also throws light on the concentrate in these lines: “gunpowder a mixture of saltpetre, sulphur and charcoal, is a Chinese invention, an inferior form of which is plausibly believed to have been assembled in the mid-ninth century3 though earlier dates have been suggested. A mixture called huo yao or ‘fire drug’, similar to gunpowder, containing realgar, saltpetre, sulphur and honey, was recorded in a Tang period list of dangerous elixirs.”

Continues Elgood: “The document advised alchemists that when warmed the mixture was likely to set their beards or even the building on fire. The earliest written formula for explosive powder using saltpetre, sulphur, charcoal and other substances is in a Song dynasty military handbook, the Wujing Zongyao, written between 1040 and 1044 ad. Early Chinese ‘gunpowder’ burned better than it exploded because it lacked sufficient saltpeter.”

The Maharaja of Jodhpur’s Guns is the first book to be written specifically on historic Indian firearms. The book has over 350 photographs of guns and Rajput paintings from private collections and showing their procedure. It showcases the arms and the story behind their inception. The book tells the stories of the guns through many paintings. Pictures of sporting guns of classic pedigree — Purdy and Sons, Holland and Holland, Churchill Brothers, etc. — too abound in the book.

The hardback offers scholars and collectors offers a chance to see the fabulous Jodhpur collection and to learn about Rajput traditions relating to hunting and war. As part of its ongoing efforts to document its collections and make them available to connoisseurs worldwide, the Mehrangarh Museum Trust commissioned the book.

‘The Maharaja of Jodhpur’s Guns’ is for the pistol buffs and adequate to make a gun lover salivate.