The production & exclusion of the minority in late colonial South Asia

January 12, 2022: The Sovereign Lives explores what it has meant for India and Pakistan to act as sovereign states entangled at birth by an unsatisfactory partition. Sovereignty is conventionally understood as a means to achieve the goals that states set for themselves. This book argues that for India and Pakistan, sovereignty has become an end in itself and that its pursuit has aided majoritarianism, insecurity, and mutual estrangement.

Written by Atul Mishra, the book examines the trajectory of three problems that the partition of 1947 bequeathed to the two states. It investigates the state-minority relations, national identity debates, and contestation over Kashmir to outline the parallel processes of minoritization, homogenization, and territorialization. It shows how these processes signify the two states’ quest for sovereignty.

The following is an excerpt from chapter three, “Sovereigns and Others: The Minorities”.

The production of the Muslims as a minority in colonial South Asia was a function of two developments that crystallized in the 1870s–1880s. By the mid-nineteenth century, colonial cartography had mapped virtually the entire subcontinent, delimiting and delineating the authoritative space of British power with unprecedented clarity and precision (Barrow 2003; Edney 1999). Once the spatial realm had become defined, the number of people living within could be ascertained. In the 1870s and 1880s, the first all-India census exercises were carried out. The colonial census was aimed at generating demographic data in terms of religion, and census officials ‘took great pains to classify the Indian population into homogeneous and mutually exclusive religious communities’ (Bhagat 2013, 437). The data ‘were published by religious categories and associated characteristics’ (435), and the census of 1881 revealed that Muslims constituted about a fifth of the total population of India (439). In 1882, the British introduced elected representation in municipal councils and rural boards, opening limited avenues for the participation of the native subjects in their own governance (Chiriyankandath 2001, 57).

This led the Muslim elite of northern India, led by Syed Ahmed, to express fears that Muslims would be politically marginalized in a democratizing set- up where numbers—which were with the Hindu majority—determined who would have access to power. These fears deepened as the Indian National Congress (formed in 1885) made an increasing representation of Indians in government its primary goal. Furthermore, alongside came new openings in government employment for which both Hindus and Muslims were to compete. Given the ‘backwardness’ of their community as regards modern education, the Muslim leadership felt the strain of competing with the Hindus who had education and numbers on their side. Together, these strengthened the feeling amongst Muslims that their political and economic interests were not only distinct from but also in competition with the Hindus (see Hardy 1972, 116–46)[1].

Between the late nineteenth and early twentieth centuries, the growth of Hinduist overtones within the emerging national imagination indicated to the Muslims that they were being excluded from that imagination. Two simplified examples from what was a complex process would be illustrative. First, by the end of the nineteenth century, Hindu reformism, aimed at ridding the Hindu fold of undesirable social practices, gave way to revivalism. The call to revitalize the Hindu religion got inextricably linked to a reassessment of the history of Hindu–Muslim relations. Within the Hindu revivalist narrative, Muslims came to be painted as ‘outsiders’ and ‘invaders’ who had subjugated the Hindus, defiled their religion, conquered their territory, and degraded their way of life.

A corollary to this understanding was the othering of the Indian Muslims and denouncement of past Muslim rule. The Arya Samaj, for instance, vilified the Muslim community and condemned its religion and past rule on the subcontinent (Jones 2006, 146–53). Citing the case of Pandit Lekhram, a leader of this movement, Francis Robinson notes that he ‘condemned all forms of Islam, particularly the “naturalist Mahammadis” that is Syed Ahmed Khan’s Aligarh movement, and demanded that the Muslims should be either expelled from India or converted to Aryanism’ (Robinson 1974, 68; see also Lekhram 1924). This view of the Muslims as outsiders, defilers, occupiers, as well as the revivalist perspective on his- story of inter-community relations on the subcontinent found a full-blown expression in Hindutva writings such as V.D. Savarkar’s Hindutva (1923) and The Maratha Movement (1925) and M.S. Golwalkar’s We or Our Nationhood Defined (1939).

Secondly, around the late nineteenth century, there emerged a movement for the Hinduization-cum-nationalization of Hindi/Hindustani, the dominant register of northern India, which was written in both Perso-Arabic and Nagari scripts and included elements from Sanskrit, Persian, Arabic, and regional dialects. Acting as linguistic pioneers and gatekeepers, journalists, editors, writers, and political leaders associated with the movement created platforms such as the Nagari Pracharini Sabha of Benaras and the Hindi Sahitya Sammelan of Allahabad to develop and promote the new language, ‘Hindi’.

This ‘Hindi’ was heavily Sanskritized and written exclusively in the Nagari script. More significantly, it was shorn of Perso-Arabic influences which had by now come to be seen as ‘foreign’, ‘corrupting’, and Muslim. As the movement for the adoption of ‘Hindi’ as the language of public discourse, education, and administration gathered pace, it became evident to Muslims that their language and culture were dispensable to the emerging national imagination. One offshoot of the emergence of ‘Hindi’ was the bifurcation of Hindi/Hindustani of old into ‘Hindi’ and Urdu. While the former came to be associated with the Hindus, the latter got cast as the language of the Muslims. The bifurcation also symbolized the division of a syncretic sociocultural realm into Hindu and Muslim communal spheres. Soon, ‘Hindi’ came to be associated with the emerging national sphere (see King 1994; Rai 2002). As the majoritarian nationalist triad of language, religion, territory— based on the ‘Hindi’ writer Pratap Narayan Mishra’s slogan ‘Hindi, Hindu, Hindustan’—crystallized, the Muslims found themselves excluded from the national imagination.

In addition, in the 1920s and 1930s, as the struggle for independence intensified against the backdrop of constitutional devolution of power, the Congress’ political programme generated anxiety amongst the Muslim leadership and large sections of the community. To Congress, the primary goal of all Indians was independence. It did not view the political interests of Muslims as distinct from those of other Indians. To the Muslims, the guarantee of constitutional safeguards against majority domination in a self-governing set-up was as important a goal as independence. They found their legitimate concerns made secondary to the nationalist movement. Further, the constitutional reforms under the Government of India Act, 1935 gave an opportunity to Indian political leaders to win real power at the provincial level for the first time (Chiriyankandath 2001, 71). In the provincial elections held within its framework in 1937, the Congress performed spectacularly well. 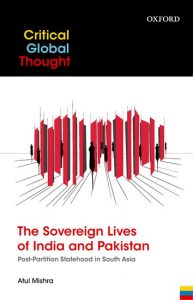 It formed government in seven out of the eleven Indian provinces and had an absolute majority in five. Its mass-base increased and ‘more than a nationalist movement or a political party, it became the whole provincial political environment’ (Tomlinson 1976, 85). At this moment of triumph, the Congress was unable to rein in its Hinduist elements and failed to sufficiently assuage the fear amongst the Muslims that its victory portended Hindu rule over the country in the near future, when power at the central level would be transferred to Indians. The year 1937 thus marked the peak of Muslim anxiety. The community felt excluded from the Indian nation and feared political subordination in an all-India set-up controlled by Indians.

The Muslim League’s project of ‘Pakistan’ did not provide a solution to the problem of the Muslims either. Although Jinnah and the League claimed that the Muslims of the subcontinent constituted a separate and distinct nation, it was not clear how all the members of this nation would become part of the Muslim homeland. The ‘Pakistan’ Resolution adopted at Lahore in 1940 demanded the creation of independent Muslim states in the north-western and eastern parts of the subcontinent where Muslims constituted the majority. However, it was silent about the fate of Muslims living in areas where they were in a minority. When the question of how they would be included within ‘Pakistan’ emerged, Jinnah and the partisans of the Muslim homeland subordinated their status to their co-religionists living in the majority areas.

Contradicting his claim made at Lahore that Muslims of the subcontinent formed a nation, Jinnah now said that Muslims living outside of the ‘Pakistan’ areas were not a nation but a ‘sub-national group who cannot ex- pect anything [sic] more than what is due from any civilized Government to a minority (Ambedkar 1945, 373). An ardent supporter of ‘Pakistan’ wrote that they had ‘the right only of rebellion for securing their legitimate rights and of growth and expansion, and revolution if possible, but not of secession’ (Durrani 1944, 24). Indeed, being brutally frank, Jinnah said that to ensure the liberation of 70 million Muslims living in the majority provinces, he was ‘willing to perform the last ceremony of martyrdom if necessary and let two crores [twenty million] of Muslims be smashed’ (Noorani 2004, 3; emphasis in original).

Thus, it was evident that ‘Pakistan’ could not include all the Muslims who found themselves excluded from India’s national imagination and who feared political subordination in independent India. As it turned out, the majority of the subcontinent’s Muslims found a national homeland in the sovereign state of Pakistan. However, those who could not or did not move to Pakistan remained, or became anew, a minority in sovereign India, where they would be subjected to exclusion and disempowerment. The problem of the Muslim minority of colonial South Asia was at best partially resolved and at worst deepened by partition. At the same time, large numbers of non-Muslims be- came minorities in Pakistan, especially in the eastern wing, and would be subjected to hardships of their own. In the two parts below, we will examine the experiences of the minorities in the two sovereign states.

[1] A summary of the Muslim elite’s anxiety is to be found in Syed Ahmed’s important speech given at Meerut in March 1888. See Prasad (2016b, 417– 28).
This is an excerpt from The Sovereign Lives of India and Pakistan: Post-Partition Statehood in South Asia written by Atul Mishra and published by Oxford University Press. Republished here with permission from the publisher
Atul Mishra is Associate Professor, Department of International Relations and Governance Studies, Shiv Nadar University
Source- India Cultural Forum

BOOK REVIEW: Feminists on how clericalism and patriarchy have steeped in Church and the country