Tracing the glorious journey of one of the fastest female pacers in the history of world cricket, Jhulan Goswami, as she moves up the ladder despite the countless hindrances posed by misogynistic politics to fulfil her only dream: to play cricket.

Anushka Sharma says: “It is a really special film because it is essentially a story of tremendous sacrifice. Chakda Xpress is inspired by the life and times of former Indian captain Jhulan Goswami and it will be an eye-opener into the world of women’s cricket. At a time when Jhulan decided to become a cricketer and make her country proud on the global stage, it was very tough for women to even think of playing the sport. This film is a dramatic retelling of several instances that shaped her life and also women’s cricket.

From support systems, to facilities, to having a stable income from playing the game, to even having a future in cricket – very little propelled women of India to take up cricket as a profession. Jhulan had a fighting and extremely uncertain cricketing career and she stayed motivated to make her country proud. She strived to change the stereotype that women can’t make a career out of playing cricket in India so that the next generation of girls had a better playing field. Her life is a living testimony that passion and perseverance triumphs over any or all adversities and Chakda Xpress is the most definitive look into the not so rosy world of women’s cricket back then. There is still a lot of work to be done and we have to empower them with the best so that the sport can flourish for women in India. 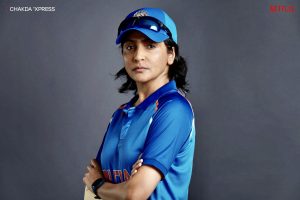 We should all salute Jhulan and her team-mates for revolutionizing women’s cricket in India. It is their hard work, their passion and their undefeated mission to bring attention to women’s cricket that has turned things around for generations to come. As a woman, I was proud to hear Jhulan’s story and it is an honour for me to try and bring her life to audiences and cricket lovers. As a cricketing nation, we have to give our women cricketers their due. Jhulan’s story is truly an underdog story in the history of cricket in India and the film is our celebration of her spirit.”

Fast bowler Jhulan Goswami, who played cricket from 2001 to 2021, says she played to put team India’s name in history.

She says: When you represent India, that’s all that is on your mind. Tum desh ke liye khel rahe ho, apne liye nahi. 11 women playing to place Team India’s name in history. It doesn’t matter if they said ladkiyan cricket nahi khel sakti. It doesn’t matter if sometimes a man’s accomplishments are placed above your own.

It doesn’t matter if the stadiums are empty.When you pull up on to the pitch to bowl, all you see is the opponent holding the cricket bat and the stumps you need to knock out. It’s this level of unblinking focus that lends itself to success. That, and remembering that you’re here not in spite of everything that went wrong, but because of everything that went right. It’s about knowing one’s place in the world and having one’s feet firmly on the ground.

You deserve to be here. And this is only the beginning. Team India is not just the roaring sound of 1.3 billion voices cheering and praying. Sometimes, it is one girl from Chakda playing a game of cricket with her team shaking, screaming for, and rising together when the stumps are finally knocked out.

Now is the time to watch the women shine. It’s our time and we’re here to play. Today, you see us. Tomorrow, you’ll remember our names. Join us, as we cheer for Team India and bring to you this story. Chakda Xpress is now filming. Meet you on the field.”

Reports indicate the biopic will be shot in India and the United Kingdom. The name ‘Chakda Express’ is similar sounding to SRK’s movie ‘Chak De India’, on hockey and shot in Melbourne. But it could just be a coincidence. Jhulan Gowswami was born in town of Chakdaha in the Nadia district of West Bengal. Maybe, the word Chakda emanates from there. Anyway, “Chakada Express’ will be the first Indian biopic on a women cricketer.

Karnesh Ssharma, Producer, Chakda Xpress / Cleanslate Filmz says: “In India, cricket is not just a sport, but an emotion. We at Clean Slate Filmz are dedicated to bringing the best of stories and Chakda Xpress is one such unique story of a pioneer in women’s cricket in India inspired by the life of Jhulan Goswami. With Netflix, we are absolutely humbled to present her significant contribution to the sport across 190 countries and with the positive response that Bulbbul received and how far it travelled, I am thrilled to partner with Netflix again as this is a story that can resonate with the audiences worldwide.”

– Material and photos supplied by Netflix.