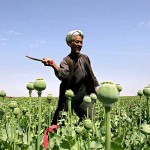 Blood minerals, hitherto associated mainly with African countries and especially with the Democratic Republic of Congo are about to spread eastwards in the direction of Afghanistan.

The UN has just revealed staggering figures. Despite promises to the contrary, in one year, the production of Afghan heroin has increased by 61 %. Before the US and NATO intervention which began in 2001, the official figures were 185 tons a year (a symbolic figure as everyone knows that illicit production fuelled both Taliban and assorted warlords, included the much glorified Massoud). Today, it is estimated at 5 800 tons (not accounting for the unofficial quantities) ! Hardly a success story for the coalition or the Afghan government. This is not to say that Mullah Omar’s reign were the good old days and that his hand chopping technique was supremely effective. All the more that the present-day Taliban and their presently close-shaven look-alikes are savvy, I-Phone totting businessmen, with their (male) offspring) as rumour has it, going to top business schools in order to develop family fortunes.

Naturally, you don’t become the world’s leading narco-state without establishing the right kind of contacts with banks, mafias, professional money launderers etc. Opacity is the name of the game

None of this can be considered a scoop of any kind. However, it begs the following question : is this nightmarish situation about to provide the business model for the burgeoning mining ventures that are emerging all over Afghanistan. All-precious lithium (used for batteries in computers and cell phones) in the first place, gold, copper, iron ore, copper, cobalt, lead, petroleum, natural gas are all there in abundance ; not to mention previous and semi-precious stones. The Chinese got the rights to the huge Aynak copper deposits in 2007- a bonanza year for Peking as they also signed a similarly mind-boggling contract with the Democratic Republic of Congo, bagging its main resources in exchange of building an increasingly unlikely infrastructure in the war-torn country.

Now a lot of sinister parallels can be drawn between both countries: the overpowering presence of mineral resources essential to modern life, especially IT, the lack of a strong government, powerful warlords, corruption of mythological proportion (DRC n° 168, Afghanistan n° 180 out of 182 countries), a badly paid army, an underpaid/unpaid civil servants, no labour laws, child labour, indifference to pollution, dwindling human rights, especially those concerning women. In both cases maternal and child mortality amongst the highest in the world- surely the strongest indicator of the state of any country.

Think of what opium and heroin has done to increase poverty in Afghanistan, undermine women’s condition (with younger and younger infant brides given away in debt payment), increasing corruption and despair. Multiply this by the amount of mines and resources you have in the country. Blood minerals, hitherto associated mainly with African countries and especially with the Democratic Republic of Congo are about to spread eastwards in the direction of Afghanistan. Unless measures are taken now and immediately by what is left of a thinking international community and the young generation of Afghans whose future is doomed to be gambled away on Stock Exchanges all over the capitalist world.