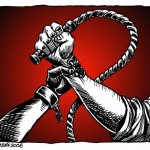 Six days before the Cairo uprising the Indian government rewarded Mr Deshmukh’s loyalty for the
Congress party by shifting him from Heavy Industries ministry to Rural Development Ministry, seen
as an upgrade because the ministry is close to the heart of mother Sonia Gandhi and son Rahul
both. During his tenure as chief minister ( 2004 -08 ) Mr Deshmukh logged a dubious distinction of
straddling over maximum suicide deaths of farmers in the Vidarbha region.

Autocratic regimes of Hosni Mubarak and his erstwhile Tunisian counterpart Zine El Abidine were
accused of squandering the nation’s wealth for personal gains and holding public welfare to ransom.
The public in both countries were fed up with escalating inflation and spiraling corruption. A
vegetable vendor suicide by self-immolation was the trigger for uprising against Abdeen in Tunisia,
it was the social networking sites like the facebook that mobilized people against Hosni Mubarak on
the streets of Egypt. Jasmine revolution provoked immediate results back in Tunisia as Abidine fled
the country even as Tahrir square holds hope for a spectacular change in that land of the pharaohs
and wondrous pyramids.

In an era where social networking sites are becoming platforms for cataclysmic change brought in
not by the incumbent administrative regimes but by the might and ingenuity of a people wronged by
the system, it is hard to imagine that in India a near lull ( or is it the proverbial lull before the storm
) has enveloped those upon whom the idea of a colour revolution is most desired. Not even the
students who mobilized against corruption in 1974 against the then Congress regime before allowing
themselves to be led by septuagenarian Gandhian Jai Prakash Narayan to participate in his call for
total revolution.

Consider this: The per capita gross domestic product in Egypt is 6,200 dollars compared to 3,400
dollars in India. Egypt’s per capita income is naturally higher at 130 dollars. According to the latest
report in CIA fact book, Egypt’s unemployment rate is 9.7 per cent whereas India’s stands at 10.8 per
cent despite those clutch of Nehru-Gandhi development schemes and the much-touted NAREGA. No
wonder then that 25 per cent of Indians are still poor – now considered a low-grade euphemism for
economically correct ‘those living below poverty line’ – ( That line again is an imaginary median of
economic yo-yo (ic ) fudging of unimaginable proportion. ) compared to 20 per cent poor in Egypt.

The country’s main opposition party, the Bhartiya Janata Party, has launched a crusade against
the corrupt UPA regime when its own house is leaking heavily through chinks of corruption. The
Karnatata chief minister B S Yedurappa is the BJP’s mascot in southern states where it has captured

power the first time. Everyone watched the graphic changeover of Yedurappa from chief minister of
Karnataka to a minister –in-chief of land and mine mafias. If A Raja, former telecom minister in UPA,
has been accused of under-pricing 2G airwaves sold to telecom operators and causing loss to the
tune of 1.75 lakh crore, the Reddy brothers of Karnataka have duped the exchequer of more than Rs
60,000 crores.

Yedurappa himself has a soft corner for nepotism. He bent every rule in the book to get over 500
crore rupees worth of land allotted to his two sons the eldest of whom, Raghvendra, is a member of
Parliament. The opposition estimates his personal worth at more than 1000 crores. For an elected
representative and a chief minister Yedurappa’s ill-gotten gains and his ability to straddle a corrupt
regime puts to shame Hosni Mubarak family’s loot. Since Yedurappa belongs to a party ‘with a
difference,’ president Nitin Gadkari terms his misdemeanours as purely ‘legal’ though ‘immoral.’ In
BJP’s vision immorality seems to be a perfect foil for democracy.

Just as loyalty to the dynasty serves as the veritable kick to the Congress’s vision of sustaining intra-
party democracy. Therefore a Deshmukh is put on an even higher pedestal despite Supreme Court’s
rap on his knuckles. “It is sad and shocking to see how the government allows and appreciates such
ministers. Not only that, it also gives them a cabinet post. It is not a dignified act and I would call
it a shameless act.” These were the words of Supreme Court Justice A.K. Ganguly at a seminar in
Mumbai recently.

These are but different colours of a wave of corrupt (r)evolution sweeping India. The Indian urban
streets are filled with vulgar display of life borrowed on plastic money. Everyone seems to be
outstripping the other in the race for pretending to be happy in an otherwise lo(a)nely life. Every
alternate fortnight a new sedan or a 4×4 SUV teases readers from super front page advertorials and
tempts TV viewers with smart promotionals. There is an average of five short messages delivered
on mobiles by real estate agents luring prospective buyers with apartments and villas on ‘easy
instalments.’ All this lopsided economic collage is not without its ‘most-visited’ page. The national
capital, Delhi, for instance, has to come face to face with shame, with such conscience churning tags
like crimerapescam capital of India. A poor woman delivers a child by the roadside along the most
happening square in Delhi because the five-star hospitals in the vicinity only deliver life in lieu of
money. And from Delhi to Mumbai not a brick is laid without the ‘ideal ( adarsh in Hindustani ) mix
of gamesmanship cementing corruption.

The picture across the countryside is even more abysmal. The farmers are either in debt or
committing suicides because they cannot afford to pay off those debts, their lands increasingly
under threat from the evil eyes of landreal estate mafias and now, often, by a kind of mafiaso that
operates in the garb of Special Economic Zones ( SEZ ) where the government itself takes the ‘supari’
on behalf of moneyed class.

Like that proverbial Indian bridegroom who presents himself as a commodity in the sick, old dowry
bazaar before he ties the nuptial knot, everything is up for sale – from kidney to morality – waiting
for its right bidder. This is corruption a la India in its throbbing, naked glory removed only in texture
from Cairo style corruption which vertically split the society into haves ( all the Mubarak’s family,
friends and pliable men in his fiefdom ) and have-nots ( those who converged at Tahrir Square).

and succeeded in his objective in less than three weeks. Wrote David Michael Green, a political
science professor at New York’s Hofstra University, after the Egyption uprising: Cowardice is talking

about democracy for others while actually undermining it when you don’t like the results. Courage
is walking like an Egyptian.

Will the average Indian, the ubiquitous aam aadmi, continue to wallow in the pool of doubtful
priapismic ecstasy. Or can he ever dare to walk stiff, like an Egyptian.
Source: South Asia Times (SAT) February 2011 issue.