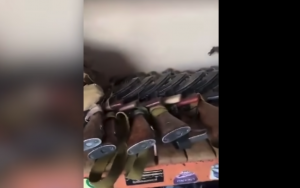 The retreat of US-led NATO forces from Afghanistan at an unprecedented pace saw a massive haul of sophisticated weaponry abandoned – and much of it is now in the hands of the Taliban*. On 15 August, the group declared itself victorious in the two-decade-long war against the western forces.
Arms and equipment that were left in and around Afghanistan’s capital city of Kabul by the retreating US forces are now being used by militants in Indian-ruled Kashmir.

In a four-minute video released by the People’s Anti-Fascist Front (PAFF), Kashmiri fighters can be seen flaunting weapons such as M1911 pattern .45 ACP pistols, FN 509 compact tactical guns, and M249 squad automatic weapons.
M4 pattern carbine, 5.56 mm M249 squad automatic guns and M1911s are part of the US military inventory and were widely used during the Afghanistan War.

Last year, the US military decided to replace M249s with the 6.8mm projectile after decades of testing and evaluation showed that the 5.56mm’s lethality at mid-ranges on the battlefield was inadequate.

The US government’s reports suggest that since 2003, Washington had transferred 75,898 military vehicles, 599,690 weapons, 162,643 pieces of communications equipment, 208 aircraft, and 16,191 pieces of intelligence, surveillance and reconnaissance equipment to Afghan forces.

Media reports claimed that American weapons are now being sold on the open market in Afghanistan by gun dealers who purchased pistols, rifles, grenades, binoculars, and night-vision goggles from Taliban fighters.

Gun dealers said a vast cache of weapons made its way to Pakistan, where there’s a strong demand for American-made arms.

These Kashmir-based groups emerged after August 2019 when the Indian government revoked Article 370 of the Constitution that had granted special powers to Jammu and Kashmir state for seven decades.

These local militant groups have spread violence across the Kashmir valley since 2019.

The Indian Home Ministry said that infiltration and terrorist attacks had decreased significantly in Jammu and Kashmir. The ministry said only 28 infiltration cases were reported in 2021 against 243 in 2018.

* The organisation is under UN sanctions for terrorist activities