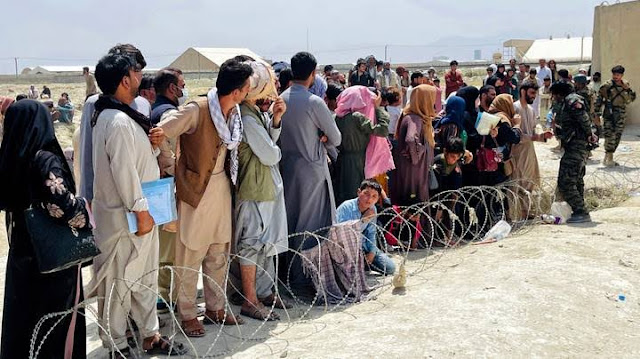 India: Several campaign organizations*, including women’s groups, giving a national call to organize Afghan solidarity demonstrations across India on August 23, making a direct attack on the Taliban takeover, have said that, today, “the liberties and lives of Afghanistan’s feminists, human rights activists, care workers, welfare workers are all in especial danger from the Taliban. Refugees fleeing the Taliban are risking their lives in conditions that display their desperation.”
Contrary to the view taken by several liberal analysts that this time the Taliban aren’t the same type of Islamic fundamentalists that had taken over the country two decades ago, these organizations regret, “Refugees face apathy, as well as hostility and violence in countries where they are seeking refuge.”

Especially criticizing the Government of India for not making its stand on the Taliban clear, they point to the manner in which “leaders of the ruling BJP and the Hindu-supremacist RSS have unleashed a hate campaign against India’s Muslims, equating all Muslims and Islam itself with the regressive and oppressive Taliban.”

They note: “The government has shamefully referenced the Citizenship Amendment Act (CAA) which goes against the Indian Constitution’s assurance of equal citizenship to all irrespective of faith or other factors, and announced that it will ‘prioritize’ Hindu and Sikh refugees from Afghanistan.”
Text:
The end of a twenty-year-old US occupation has brought no relief for the people of Afghanistan. The takeover of the country by the Taliban has created a situation of chaos, crisis, uncertainty, and fear. The last time the Taliban was in power, it had unleashed a reign of terror, arbitrary and brutal diktats and punishments, and complete loss of personal freedom. Desperate to escape such a fate and fearful for their freedom, rights, and lives, thousands of Afghan people are fleeing the country.

Inside Afghanistan, every day brings news of new Taliban atrocities. The Taliban has massacred people of the Hazara minority community, killed the kin of a Deutsche Welle journalist, forced a woman TV anchor to be replaced by a man, is conducting a door-to-door witch-hunt and abduction of dissidents; is violently attacking journalists, killing at least one, and has shot dead protestors in the streets. The Taliban has declared that it is their authorities who will decide how far women can study, what subjects they can study, what jobs they can hold; and what they must wear. Already reports are coming in of Taliban attacks on women.

Displaying incredible courage, women are protesting with handmade posters on the streets of Kabul; and Afghan men and women all over the country are protesting the Taliban takeover with Afghan flags in their hands, facing Taliban bullets in the process. It is these fighting democratic people of Afghanistan who need us to extend solidarity and amplify their voice.

Many international actors bear responsibility for Afghanistan’s tragic fate today. The Soviet military intervention in 1979 at the behest of the then Afghan government, made Afghanistan the scene for Cold War competition between the Soviet Union and the USA. The US pumped money and arms to back the mujahideen forces against the Soviet-backed army. It was in this backdrop that the Taliban could emerge. In 2001, the US and its allies again led a military invasion and occupation of Afghanistan, in the name of liberating Afghanistan’s people and especially its women from Taliban rule and destroying the Taliban and other terrorist outfits based in the country.

The latest developments have thoroughly exposed the lies that served as pretexts for the invasion and occupation. Under the US occupation, Afghan people were subject to bombings, drone strikes, and arbitrary raids and killings by the occupying armies and their hired private mercenaries. The US occupation actually enabled the Taliban to consolidate itself. The US, having decided to exit Afghanistan, set up unilateral negotiations with the Taliban, excluding its allies as well as the Afghan government.
This culminated in a US-Taliban pact which made it clear that for all purposes the US was transferring power to the Taliban. With the mask of “war on terror”, “war for democracy” and “war to protect Afghan women” having come off, the occupation stands exposed as a cynical and violent imperialist exercise intended to subjugate Afghanistan and serve US interests.

Today, the liberties and lives of Afghanistan’s feminists, human rights activists, care workers, welfare workers are all in especial danger from the Taliban. Refugees fleeing the Taliban are risking their lives in conditions that display their desperation. Among refugees hanging onto the wings of a place leaving Kabul, two men – a 20-year-old football player and a 25-year-old doctor – fell to their deaths. Refugees face apathy, as well as hostility and violence in countries where they are seeking refuge.

The Government of India is yet to make its stand on the Taliban clear. Meanwhile, leaders of the ruling BJP and the Hindu-supremacist RSS have unleashed a hate campaign against India’s Muslims, equating all Muslims and Islam itself with the regressive and oppressive Taliban. The government has also shamefully referenced the CAA which goes against the Indian constitution’s assurance of equal citizenship to all irrespective of faith or other factors and announced that it will “prioritize” Hindu and Sikh refugees from Afghanistan.

Election Commission of India must ensure that Afghanistan and Taliban are not used as pretexts for hate speech during campaigns
We in India who resist the BJP-RSS agenda of imposing regressive and oppressive bans on what we can eat, think, write, sing, and speak, and whom we can love, and the violent lynch mobs who enforce these bans, stand with the people of Afghanistan in their struggle to assert their right to live and take decisions freely. We who defend India’s Constitution and flag against the RSS and BJP’s attacks, stand with Afghan people as they defend their country’s Constitution and flag and demand that only a constitutionally elected parliament be allowed to pass or amend laws or national symbols.

The UN, the international community, and all countries including India refuse to recognize the Taliban regime in Afghanistan, and instead support the demand raised by Afghan civil society and women’s groups that “Any change of political order or the constitution must happen through elections and by the will of the people of Afghanistan, not through the threat of violence, or through war and military intervention,” and “drafting, legislating and implementing the civil and penal laws shall be based on the Constitution of Afghanistan, the national parliament shall be the sole legislating body, and the creation of any non-elected body, including the Supreme Theological Council of the Taliban, and the practicing of any unconstitutional power shall be outlawed.”

An international tribunal is set up to ensure justice for the war crimes committed by the US and NATO in the course of the invasion and occupation of Afghanistan.

The UN Human Rights Council must initiate a fact-finding mission to identify and bring to justice all perpetrators of atrocities and violence against Afghan civilians – including the occupying armed forces as well as the Taliban and other armed groups. Taliban leaders must also be brought to justice for every atrocity they inflicted on women and minorities in the past.
United Nations Security General, the UN Human Rights Council, international human rights organizations and the international community must act to ensure that Afghan women’s rights groups are the center of any negotiations and other processes to ensure a just peace and secure the rights of all Afghan people.