Why Indo-Pak relations have been on ‘knife’s edge’ , hostilities may remain for long 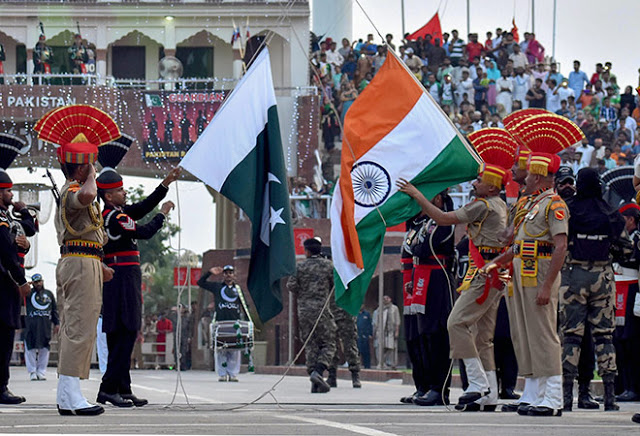 The past few decades have seen strides being made in all aspects of life – from sticks and stones to weaponry. The extreme case of this phenomenon has been nuclear weapons. The menace caused by nuclear weapons in the past is unforgettable. Images of Hiroshima and Nagasaki from 1945 come to mind, after the United States dropped two atomic bombs on the cities.
This squashed the Japanese opposition and effectively ended World War 2, killing over 150,000 in its wake. Seventy-five years after Hiroshima, the nuclear threat is far from over. Even though the number of nuclear warheads has gone down since the Cold War, the number of countries possessing them has gone up – to nine. The aftermath of a nuclear war today can be catastrophic, especially so because of the rise in sophistication of nuclear warhead technology.
Troublesome neighbours
Out of the several regions of global tension, arguably the most critical is the one between India and Pakistan. Despite the shared historical, geographic, economic and cultural ties, the relationship between India and Pakistan has been strained ever since the partition of British India in 1947.
India’s nuclear programme dates back to 1944, while still in the shadow of the British rule. After not much progress, India revitalized its nuclear program in 1962, following a Himalayan border war against the Chinese. India refused to sign the Non-Proliferation Treaty (NPT). After detonating its first nuclear device in 1974 (under the codename “Smiling Buddha”), India became the sixth country to possess and detonate nukes.
This period saw a rising conflict between India and Pakistan, with three wars fought between the neighbours in the period. The First Kashmiri war was in 1947 over Jammu and Kashmir was the first. The second war was the Indo-Pakistani War of 1965, again over J&K insurgency.
The third and arguably largest war was the Indo-Pakistani War of 1971, which resulted in Pakistan conceding over 50,000 sq miles of territory and millions of its populace in the form of the newly formed Bangladesh. This weakened Pakistan’s standing in South Asia. As a response, then PM Zulfiqar Ali Bhutto aggrandized Pakistan’s nuclear programme.
Two decades and a half later, Pakistan conducted a successful nuclear test in May 1999. This made Pakistan the seventh nation to do so, sending shock waves across the globe. This event marked the beginning of the second distinct nuclear enmity in the world, the first one being the former Soviet Union and the United States.

The tensions between the two nations kept simmering in the next few years. It was around this period that the intellectual community of the nations took notice and acknowledged the peril that nuclear weapons could put the Indian sub-continent in. Voices started being raised on both sides of the borders.
One such voice belonged to Dr Abdul Hameed Nayyar, a Pakistani physicist who did his PhD from London. Nayyar was one of Pakistan’s leading peace activist at the time, who opposed the ongoing nuclear race between India and Pakistan. Nayyar, along with his colleagues, were instrumental in the Peace Movements in Pakistan in 1985. Mass gatherings were held in different regions of Pakistan, where leading figures from the field of academia, politics, military and the likes mobilized support for the denuclearization and peace.
Nayyar and Co, along with counterparts from India, laid the founding bricks of the Pakistan India People’s Forum for Peace and Democracy (PIPFPD). The objective of this initiative was to create a platform for everyday citizens of the two countries to listen to voices different from the antagonistic voices of the respective Governments.
This organization held biannual joint conventions, alternating venues between both nations. In Nayyar’s admission, PIPFPD mustered resounding support in both countries. The group contributed several research papers, books and articles to spread their message farther. They also pursued the signing of No War Pact between India and Pakistan. However, in the forthcoming years, their efforts lay waste, as the friction between the countries grew.

To the world’s horror, India and Pakistan entered another war in May 1999, the Kargil War, again on the issue of Kashmir insurgency. Kargil War is the only example of direct warfare between the two nuclear nations. A much more dire incident occurred in December 2001, when the Indian Parliament was attacked by two Pakistani terrorist groups, leading to twelve casualties. These attacks strained the relations between the two states to a new extreme. This also had severe implications for all the diplomatic work done by the PIPFPD.
India, like China, committed to a No First Use (NFU) doctrine in 2003, with the intent of defusing tensions with its neighbours. Under this commitment, India promised to use nuclear weapons only in response to a nuclear attack, and never in retaliation to conventional weaponry. Pakistan felt it would be unable to defeat India in a conventional war, which was its motivation to pursue nuclear weapons.
Thus, till now Pakistan has refused to sign to any such doctrine. As a part of his 2014 election campaign, Prime Minister Narendra Modi’s manifesto promised to revise and reupdate India’s nuclear doctrine to make it more relevant to current times. Many interpret this as an upcoming change in India’s NFU doctrine, advocated initially by the Vajpayee led BJP. However, later Modi denied all such speculations.
Relations between the two have been on a knife’s edge since February 2019, when a Pakistan based terrorist group Jaish-e-Mohammad, claimed responsibility for the Pulwama attacks, which led to the deaths of 40 paramilitary police officers. India responded with airstrikes on Pakistani territory, a first in almost half a century. At the time, a war breaking out seemed imminent.
As a response, Indian Defense Minister Rajnath Singh said, “Until now, our nuclear policy has been based on ‘No First Use’, but what happens in the future will depend on the circumstances”. Such statements by the Defense Minister cast shadows of doubts on India’s NFU policy and effectively render it meaningless. To make matters worse, this statement came at a time when the two states were hardly on talking terms. This statement can have dangerous consequences for the two countries.
The different nuclear heads owned by India and Pakistan. 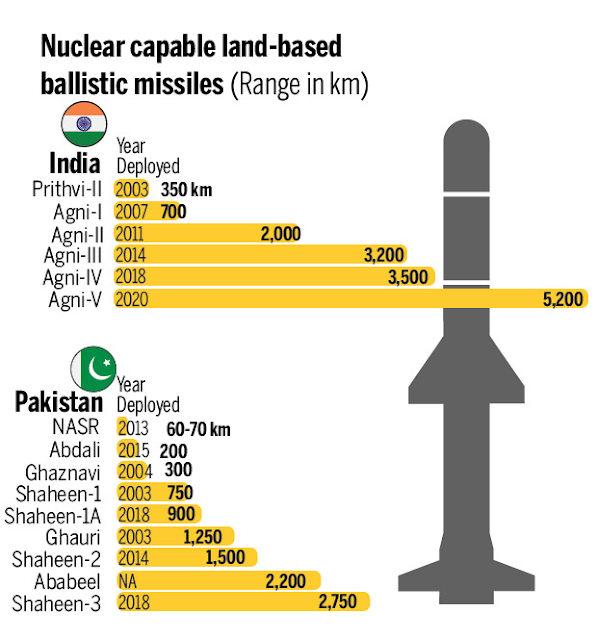 No Indian government till now has shown the political intent (or courage) to address the Kashmir issue, to demilitarize it, or enter diplomatic talks with Pakistan to reach a solution. India’s decision to revoke Article 370 and divide India administered Kashmir into two territories, followed by inhumane measures such as the curfew and communications blackout, again put India and Pakistan at loggerheads.
Now, even though hostility has reduced relative to past years, the territorial rivalry remains, and is likely to last for far longer than expected. Pakistan says that it won’t take steps towards disarmament until the United States also does the same. However, hope for a peaceful future, free of weapons of mass destructions remains. Nayyar believes that times will change and the chasm between the people will fill.
He cites the examples of the Citizenship Amendment Act (CAA)-National Register of Citizens (NRC) and farmers’ protests to say that times are changing, and people are finding their voices. Only after India and Pakistan agree on these fundamental issues can a peace future be envisaged, he says. Before India and Pakistan call for worldwide disarmament, they must normalize nuclear relations with each other. A world free from the fears of nuclear war can not be created or sustained without the active involvement of India and Pakistan.
—
* Second-year management student at Indian Institute of Management-Ahmedabad. This article was written with inputs by Dr Abdul Hameed Nayyar, a physicist and noted peace activist from Pakistan