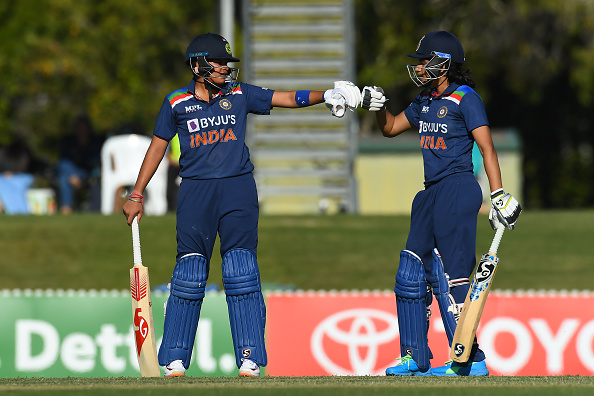 So finally, Mithali Raj and Co. bounced back to pull off a thrilling victory over Australia breaking Aussies’ 26 match winning streak and it had to be India. Jhulan Goswami covered up for her follies of the last ball no-ball episode to hit a boundary in the last over to win the game for India with three balls to spare.

It seems Indian girls are making the match a thriller by allowing it to drift till the last over despite opportunities to close the match early. Indian batting line up don’t have players like Mooney and Carey who would convert ones into twos and twos into threes. However, a thrilling two-wicket win for India, set up by Jhulan Goswami’s 3 for 37 and sealed by her with the bat in the last over of the chase, to snap Australia’s world-record ODI-winning streak at 26 matches. As men’s outfit generally does, run the first run quickly so you can take the second easily, the management should ponder over this aspect.

Australia weren’t without their own flaws as a fielding unit, however, and they kept losing personnel – Rachael Haynes, Beth Mooney, and Sophie Molineux – to injuries as the chase went along. India succeeded on the day due to maiden ODI half-centuries from Shafali Verma and Yastika Bhatia, whose century stand lifted India to 160 for 1 inside 30 overs as Australia’s attack struck more wrong notes than the right ones early in the innings.

After Australia chose to bat, half-centuries from Ashleigh Gardner and Beth Mooney and a 32-ball 47 from Tahlia McGrath set up Australia’s march to 264 for 9. Poor fielding from India, as in their botched defence of 274 two days ago, undid much of the early inroads made by their attack on a used Ray Mitchell Oval surface with decent carry and movement.

Goswami and Meghna delivered incisive swing-bowling spells as India sent Rachael Haynes and Meg Lanning back in the powerplay. Both fell to Goswami, for 13 and 0 respectively, the veteran quick returning 6-2-15-2 in her first spell. Alyssa Healy was the next to depart, as Rajeshwari Gayakwad ran her out at the non-striker’s end with a deft touch off Perry’s straight drive. No. 4 Perry anchored a short-lived rebuild, making 26 off 47 balls, adding 25 with Mooney. Along the way, Perry became the fifth Australian woman to 5000 international runs. Belinda Clark, Karen Rolton, Alex Blackwell and Meg Lanning had achieved that feat before Perry.

The winning moment when @JhulanG10 hit straight down to the ground to trigger wild celebrations! #TeamIndia #AUSvIND pic.twitter.com/GoDQFCupcq

After Perry’s departure, Gardner led the rebuild and brought up her fifty, her fourth in the format, with a majestic inside-out six over cover in the 40th over. One ball later, Mooney, who had received two reprieves, reached a half-century of her own, her third in as many limited-overs innings against India dating back to the 2020 T20 World Cup final, with a four to midwicket. Goswami, who surpassed Charlotte Edwards to become the second most capped women’s ODI player, ended the innings with a four-run final over to finish with 3 for 37.

Earlier, after Shefali and Yastika built a strong platform it was Deepti Sharma and Sneh Rana struck a breezy seventh-wicket stand of 33 that brought India back into the game after they had slipped from 160 for 1 to 208 for 6.

In the 44th over, Rana received two lifelines against Molineux, who was bowling with her face tightly strapped after having copped a blow to the mouth at the end of the 39th over when a throw from Stella Campbell had bounced awkwardly off the pitch. Molineux had just returned to the field for her second spell, and her over saw Rana dropped twice in the space of three balls: first by Molineux herself and then by Nicola Carey at square leg.

There was more good luck for Rana in the next over, with Molineux failing to hit the stumps from cover when she was well short of her crease, and then when Carey was no-balled for overstepping after catching her off her own bowling. Jhulan Goswami was declared player of the match. It was an overall team effort with the youngsters standing tall, again: Yastika Bhatia batting like a veteran in her debut series, Sneh Rana, coming good much lower down, Shafali Verma being the senior partner at the top, Pooja Vastrakar stepping up with the ball despite dropped catches….
It is still a moment to be celebrated.