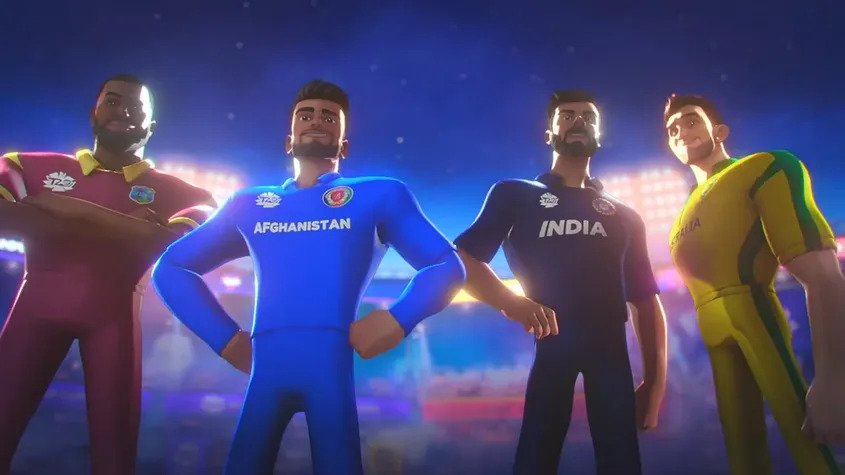 MELBOURNE, 23 September 2021: Fans around the world are invited to ‘Live the Game’ with today’s global premiere of the official anthem and promo film for the ICC Men’s T20 World Cup 2021. The 16-team tournament is the biggest sports event ever in the UAE and Oman and takes place between 17 October and 14 November.

Composed by renowned Bollywood music director Amit Trivedi, the animated film features young fans from all over the world immersed and engaged in explosive T20I cricket and features some of the sport’s biggest superstars.

Host nation and India captain Virat Kohli, leads the group of players brought to life as ‘avatars’ in the animation, that interact with each other throughout. Kohli is joined by fellow captain Kieron Pollard of the reigning champions, West Indies as well as Australian all-rounder Glenn Maxwell and Rashid Khan of Afghanistan. Launched in collaboration with ICC’s global broadcast partner Star Sports, the film premiers worldwide today across ICC, BCCI, and Star Sports’ social media handles. To view the film, click here. The video is also available to download on the ICC Online Media Zone.

The animation features a brand-new broadcast technology that blends both 3D and 2D effects to create a stunning film. A production team of over 40 people, including designers, modellers, matte painters, animators, lighters, and compositors, worked round-the-clock to produce the final version.

The ICC Men’s T20 World Cup is the pinnacle of the shortest format of cricket and returns for the first time in five years on October 17th. The tournament promises high-octane cricket and entertainment for everyone, including families and those new to the game, with matches taking place in a safe Covid-19 environment across the UAE and Oman. 16 countries, featuring the sport’s biggest names and best teams, will compete in global cricket’s biggest event since the pandemic.

Kieron Pollard, one of the biggest power-hitters of T20 cricket and captain of the reigning champions, is excited by this year’s competition. It is the return of the cricket world cup, since last year’s highly successful ICC’s Women’s T20 World Cup, that saw 86,174 in the iconic MCG for the final, a record for attendance of any women’s cricket match.

“There is something magical and special about putting on the West Indies jersey and stepping onto the field. This upcoming ICC Men’s T20 World Cup will give us more special moments. We know our fans will be fully engaged, watching, and supporting and we want to give them plenty to cheer about. I’m excited about the magic moments ahead”, said Pollard.

Glenn Maxwell, all-rounder, Australia one of the greatest T20I players to have ever played the game agrees. “The ICC Men’s T20 World Cup is going to be one of the toughest and most exciting on record. There are so many teams that could take the trophy and every game will be like a final. We can’t wait to get started knowing the calibre of players we have.”

Sharjah Cricket Stadium and Abu Dhabi’s Sheikh Zayed Cricket Stadium are two of the three remaining host grounds, while Dubai International Stadium will be the backdrop for the final on Sunday, 14 November.

Claire Furlong, ICC General Manager, Marketing and Communications said: “We are excited to be launching this film ahead of the ICC Men’s T20 World Cup 2021 which is so different to anything we have delivered before. Cricket has more than a billion fans around the world, and we wanted to put our young fans in the heart of the action alongside their heroes and allow them to live the game. Partnering with Star Sports and Amit Trivedi to create the animation and music for the campaign has given us a wonderful opportunity to celebrate the fact that India are our hosts despite the event being staged in Oman and the UAE. I hope cricket fans enjoy watching and listening to this as much as we enjoyed creating it.”

Commenting on the campaign launch, Dhiraj Malhotra, Tournament Director, ICC Men’s T20 World Cup said: “We are looking forward to hosting a spectacular tournament in the UAE and Oman and are working very closely with the ICC, ECB and Oman Cricket to keep it safe and entertaining for all. This tournament film is an invite to all our fans to come by and witness a top-class global sporting event and come live the game that we all love, with us.”

Sanjog Gupta, Head – Sports, Star and Disney India, said, “The association with ICC to co-create the campaign for the ICC Men’s T20 World Cup #LiveTheGame was an opportunity to create a compelling invite for young viewers around the world. Our creative team, at Star Sports, has collaborated with award-winning talent from across the globe and brought to life the animated anthem that flags off fans’ journey towards the tournament.

Fans’ expectations from sporting experiences are evolving and we believe the future lies in personalised and immersive engagements across multiple touchpoints and varied platforms. The theme, sound and look of the campaign strive to connect with young fans who no longer want to just watch but #LiveTheGame. It also signals our commitment to a new era of Cricket experiences.”

An announcement on venue capacities, ticket pricing and packaging will follow, while fans can get involved already via the ICC Men’s T20 World Cup 2021 Trophy Tour, driven by Nissan.

The best of the fan-generated content will be collated and celebrated weekly on the T20 World Cup’s social media channels where fans can also win signed event merchandise and help to take the trophy to more cricket playing nations than ever before.