Novak Djokovic to compete in Australian Open after vaccine exemption 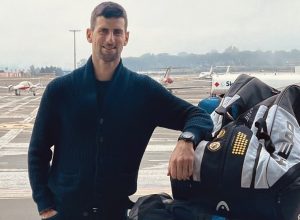 MELBOURNE, 5 January 2021: World number one and nine-time AO winner Novak Djokovic will defend his title at the Australian Open (AO) 2022 here. A media statement by AO22 says Djovic applied for exemption from being vaccinated and was granted the same. The process involved independent panels of medical experts.

Every player in AO22 is supposed to be vaccinated or get an exemption for the same. In a Tweet, Djokovic said, ” I’ve spent fantastic quality time with loved ones over break & today I’m heading Down Under with an exemption permission. Let’s go 2022!” He is likely to land in Melbourne sometime today.

Many Twitter posts have questioned the exemption decision. One Tweet says, ” @AustralianOpen how much health, love and joy and respect do you think the people of Melbourne will have for your tournament after giving this guy the red anti vaccination carpet? Appalling double standards (peter4holidays).

Happy New Year! Wishing you all health, love & joy in every moment & may you feel love & respect towards all beings on this wonderful planet.

I’ve spent fantastic quality time with loved ones over break & today I’m heading Down Under with an exemption permission. Let’s go 2022! pic.twitter.com/e688iSO2d4

Djokovic had pulled out of the Serbia team for the ATP Cup in Sydney, which had raised doubts over his participation at Melbourne Park.

BBC tennis commentator Andrew Castle said, while he was “not surprised” by the reaction to the exemption, the decision was “not unfair”.

“But he must have one. We knew this would happen when exemptions were announced. I’m not surprised [by the reaction] but what I will say is, it’s not unfair because he satisfied two independent panels.

“Is he giving the world of tennis the correct lead? It’s arguable. It doesn’t look like he’s broken any rules, he’s satisfied the independent panels so we’re once again left arguing over another Covid-related matter.

“I can understand the Australian public being furious. They’ve been to hell and back and if the crowd boo him – which I think they will – he will put it aside and become the favourite to win. No-one is arguing about his tennis, the concern here is leadership and the example he is setting, but it’s not mandatory to have the vaccination.” 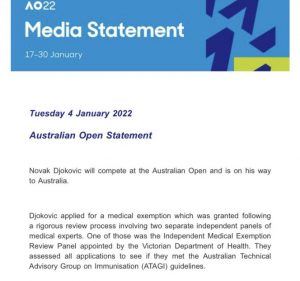