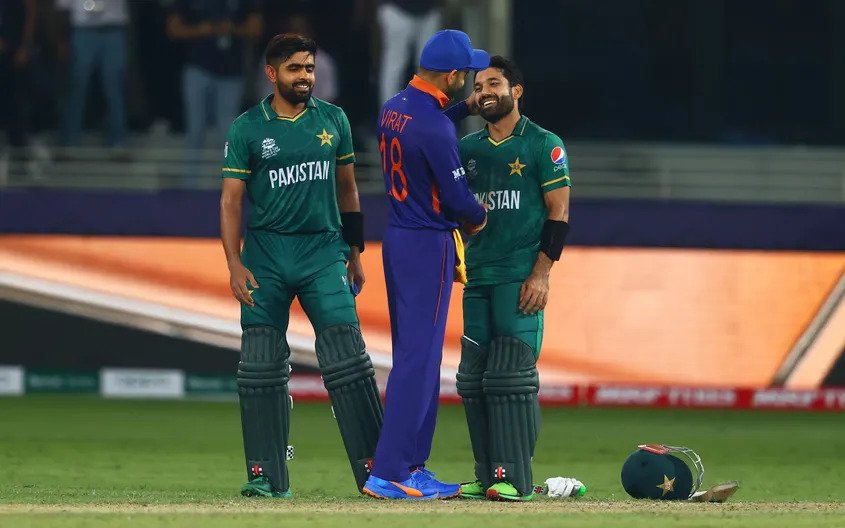 Shaheen Afridi, Babar Azam, and Mohammad Rizwan propelled Pakistan to a famous 10-wicket victory as they toppled old rivals India for the first time ever at an ICC World Cup event in Dubai.

The blockbuster Group 2 clash marked the two sides’ first T20 meeting since the 2016 ICC Men’s T20 World Cup and set a competitive target of 152 to win, Babar’s side cruised to a history-making triumph under the lights. 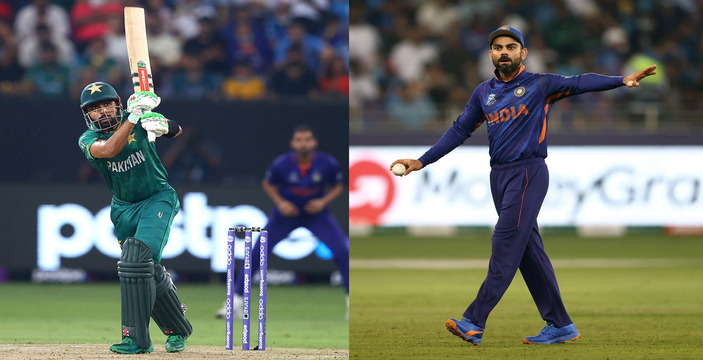 Afridi starred with the ball as his spell of three for 31 – bolstered by Hasan Ali’s two for 44 – decimated the Indian top order and helped restrict Virat Kohli’s team to 151 for seven.

And despite Jasprit Bumrah, Mohammed Shami and Ravindra Jadeja all spearheading a star-studded Indian attack, Babar (68 not out) and wicketkeeper Rizwan (79 not out) delivered a run-chasing masterclass to inflict a first-ever T20 ten-wicket defeat on India.

Babar inserted the Indians after winning the toss and with the atmosphere at fever pitch by the time Afridi steamed in for the first delivery, the skilful left-arm seamer got Pakistan off to a flyer.

He trapped the dangerous Rohit Sharma lbw with just the fourth ball of the match as his menacing, full and straight thunderbolt pinned the Indian opener on the crease.

That brought Kohli – and his stunning T20I average of 52.65 – to the middle but the Indian captain’s arrival did little to halt the rampant Afridi juggernaut.

The 21-year-old carried on where he left off in his second over as his sumptuous in-swinger proved too good for KL Rahul and bowled him through the gate.

The Indian top order rallied, however, with Suryakumar Yadav and Kohli pummelling two sixes in quick succession to extend a gripping opening period.

But Yadav soon followed Sharma and Rahul back to the pavilion as a fine diving catch by Rizwan – off the bowling of Hasan – had the Indians reeling at 31 for three.

Rishabh Pant led the Indian recovery as his enterprising innings of 39 – including two extraordinary one-handed sixes – helped steer Ravi Shastri’s side towards a defendable-looking total.

But with the left-hander motoring in the 13th over – and Kohli on a run-a-ball 29 at the other end – he succumbed to the leg spin of Shadab Khan as the Pakistan all-rounder held on to a steepler off his own bowling.

Kohli continued to keep things ticking with an intelligent middle-over innings as a steady stream of boundaries, coupled with some masterful manoeuvring, maintained India’s momentum and brought up his perfectly-judged 50.

But Pakistan then regained the initiative as Jadeja (13) was caught in the deep off Hasan and Kohli, who made 57 off 49 balls, was finally dismissed by the returning left-arm pace of Afridi.

And Hardik Pandya – hailed by Kohli for his finishing abilities before the match – soon followed his skipper in departing as he was caught by Babar off the bowling of Haris Rauf to leave India on 151 for seven at the interval. 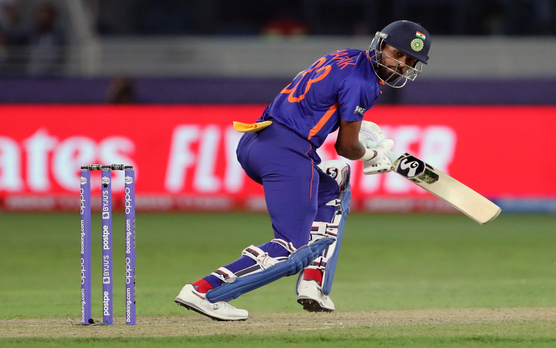 Rizwan wasted no time kickstarting the Pakistan reply as he swatted Bhuvneshwar Kumar for a four and six in the very first over.

And with captain Babar’s cover drive functioning in typically-fluent – and aesthetically-pleasing – fashion at the other end, the 2009 ICC Men’s T20 World Cup champions had soon laid the foundations for a crack at India’s total in the blink of an eye.

With Pakistan on 43 for nought at the end of the powerplay, Kohli introduced the left-arm spin of Jadeja to initiate what felt like a crucial spell in the dynamic of the contest.

But Rizwan and Babar continued to masterfully navigate their way through the chase, with the skipper clubbing Jadeja for a monstrous six off the back foot before Rizwan survived a run-out opportunity at the non-striker’s end.

India continued to search for a breakthrough but Babar and Rizwan repelled all Kohli threw at them to leave 17 more runs required from the final three overs.

And they finished the job in style, with Rizwan launching Shami for two fours and a six to fire his side to victory and cap a historic day for Pakistani cricket at the Dubai International Stadium.