Are Bezos and Musk Launching Us Into a New Space Age, or Just a U.S. Space Grab?

The space race was once between two countries—the Soviet Union and the United States. It is now (at least on the surface) between three billionaires—Elon Musk, Jeff Bezos and Richard Branson. Two of them—Branson, founder of Virgin Galactic, and Bezos, founder of Blue Origin—recently rode their respective companies’ suborbital flights (meaning that they cannot be considered proper spaceflights, as they did not reach a stable orbit around the Earth). Branson’s space ambitions seem to be limited to developing a market for the exotica of space tourism. Elon Musk and his company SpaceX have been playing for the long haul, with a series of rockets and launches already to the company’s credit, including to the International Space Station. Bezos and Blue Origin also fall into the latter camp.

Behind this apparent show of rich kids playing with their expensive space toys, there are bigger forces at play—namely, that big capital is entering spaceflight, hitherto the exclusive domain of nation-states. While it appears that three men with deep pockets are funding their respective space ventures, the reality is that it is the U.S. taxpayers who are funding these space efforts. In this new space age, the U.S. is also proposing to ride roughshod over the space agreements that space is a “global commons.” The U.S. would like to convert space into its “final frontier,” under the premise that space belongs to any country that can mine its riches.

Many people take for granted that the U.S. was the winner of the space race against the Soviet Union, since they beat the Soviets to the moon. But what is overlooked in this narrative is that the space competition is not simply about who sent the first man to the moon, but also about who built the better rockets.

Strangely enough, it was the fall of the Soviet Union that brought forth information that Soviet technology produced rocket engines that had consistently outperformed the American ones. Today, the Russian-produced rocket engines—RD-180 and RD-181—still power U.S. rockets. The Atlas rocket line, which is the mainstay of U.S. heavy-lift launch vehicles, uses RD-180 engines. Atlas is owned by United Launch Alliance (ULA), which is a joint venture of Lockheed Martin and Boeing. When Orbital Sciences (now a part of Northrop Grumman) was looking for launch vehicles for its Antares program, they used Soviet-era 40-year-old, mothballed NK-33 rocket engines. After one of them blew up due to cracks in the aging engines, Antares switched their rocket engines—to yet another engine designed and produced by Russians, the RD-181.

In 1992, just as Russian rocket engines were becoming the mainstay of the U.S. space program, the U.S. imposed sanctions on the Indian Space Research Organization (ISRO) and Russia’s Glavkosmos. Glavkosmos was Russia’s space marketing arm for selling cryogenic rocket engines and technology. These sanctions were only withdrawn after ISRO developed its own cryogenic engine technology. Russia’s contribution to India’s rocket program was the seven cryogenic engines that it sold to ISRO, a part of the N1 upper stage of the Soviet Union’s moon mission.

Why did the Soviet-era rockets perform better than the U.S. rockets? It is because the Soviets had mastered what is called the closed-cycle rocket engines well before the Americans. For any rocket capable of spaceflight, it needs both fuel—e.g., kerosene, hydrogen, or methane—and a burning medium, such as oxygen. Meanwhile, in an open-cycle engine—Saturn V of the Apollo program was an open-cycle design—a part of the fuel does not reach the main combustion chamber. It is used to power a turbo-compressor pumping fuel and oxygen and exits directly into the atmosphere. This results in a loss of efficiency for the engine, which then has to be compensated by carrying more fuel.

In a closed-cycle engine, or what is called “staged combustion,” the products of the first-stage combustion powering the turbo-compressor are fed to the main combustion chamber, avoiding any loss of fuel. The Soviet engineers had solved the problem of materials that had to withstand the extremely harsh conditions of injecting the products of oxygen-rich combustion into the main combustion chamber. The U.S. engineers thought that this was simply not possible and were shocked when, while visiting Russia in the ’90s, they were shown the mothballed engines of the ill-fated N1 project, the Soviet attempt at the moon shot. These were the engines that Orbital Sciences tried to use for their Antares program, christening them as AJ-26, before they switched to the more advanced Russian RD-181 engines.

Following the Ukraine crisis of 2014, the U.S. has imposed sanctions on many Russian companies. However, it still uses rocket engines sourced from Russia for its space program, both civilian and military. After the U.S. space shuttle program was shut down in 2011, taking U.S. astronauts to the International Space Station and bringing them back was left to Russian Soyuz rockets. It was only after SpaceX developed its space shuttle that the U.S. again had a spacecraft for carrying its astronauts to the International Space Station.

The U.S. Congress has decreed that U.S. companies will have to phase out the Russian engines from their military launches by the end of 2022. This is where Bezos and Musk come in, as both are vying for the future launches that the U.S. military and NASA are planning. Though it appears as if Musk and Bezos are developing the rockets using their own money, it is still NASA that is footing the bill. NASA pays upfront development costs and, later, price per launch.

If the rocket engines are the key to any serious space program, where does the U.S. stand in this new space age? ULA has had to switch to the U.S.-made engine as per the new NASA requirement. It has chosen the BE-4 rocket engine from Bezos’ Blue Origin, though ULA is reportedly unhappy with delays by Blue Origin and the lack of “attention and priority” the company is putting on the engine. The other rocket engines in the fray are from Musk’s SpaceX. Orbital Sciences still appears to be tied to Russian engines for its cargo services to the space station. So the U.S. rocket engines seem to be restricted to BE-4 from Blue Origin and SpaceX Falcon Heavy rocket/Raptor engines. The American space race is essentially a two-horse race between the two super-rich billionaires. 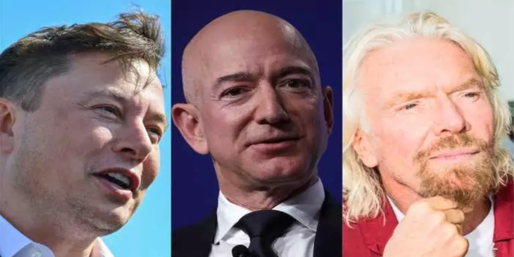 How do Bezos and Musk fund their space ventures? The public believes it is with money that the ‘visionary’ billionaires have made as a result of their acumen for entrepreneurship—they represent a version of Ayn Rand’s ‘heroes’ from her novels. The brutal truth is that Bezos as a capitalist has squeezed his workers, increasing their workload so much that they are unable to even take bathroom breaks. Amazon pays its workers wages that are “close to the poverty line for a family of four” and need to be supplemented by social welfare. The company has destroyed the small retail sector, and it competes with its own suppliers with Amazon-branded products and is “crushing them with competitive pricing.”

Musk claims to be the other visionary by developing Tesla, the electric car of the future. While the existing automakers were slow to develop electric cars, Tesla has an edge of being the early mover and cashing in on the environmental regulations in various countries that demanded that automakers earn carbon credits by selling a certain percentage of their output as electric cars. For example, in the first quarter of 2021, almost all of Tesla’s profits came from carbon credits it sells to other automakers. Since Tesla makes only electric cars, it has surplus carbon credits that it sells for a profit to other automakers. The crucial component of electric cars is the batteries, which Tesla outsources to others. One of the key battery suppliers to Tesla is Contemporary Amperex Technology Co. Ltd. (CATL), which is the largest lithium battery manufacturer in the world. Its owner, Zeng Yuqun, has a net worth more than that of Jack Ma of Alibaba. What Musk has is a huge social media presence, which he has leveraged in hyping up his auto, and now space, ventures.

The other disturbing aspect of the new space age ushered in by the space billionaires is the U.S. policy of grabbing space for its private companies. This violates the Outer Space Treaty. The U.S. position is that whether or not outer space is a global commons, its commercial exploitation is open to all. This is a position the U.S. had on seabed mining in international waters as well. Such a policy privileges the powerful and technologically advanced states and is another way of blocking the essence of the global commons.