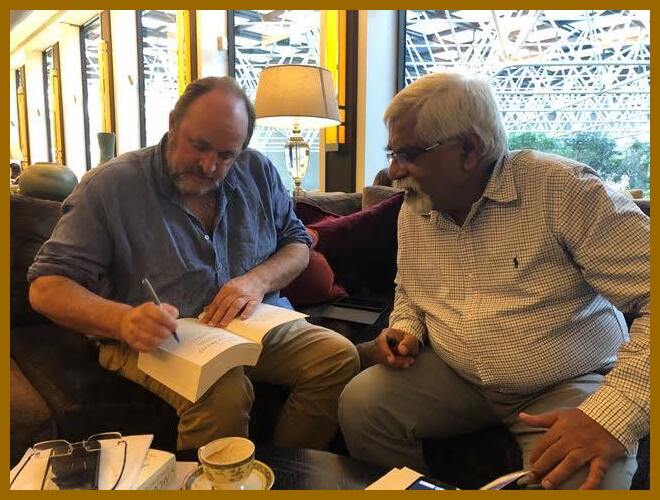 William Dalrymple autographs ‘The Anarchy – The Relentless Rise Of The East India Company’ for the interviewer SAT Editor Neeraj Nanda.

William Dalrymple’s ‘THE ANARCHY – THE RELENTLESS RISE OF THE EAST INDIA COMPANY, Bloomsbury, pp 522, released recently, is making global waves among readers. The India based Scottish writer is well known for his earlier prize-winning works, White Moguls, The Last Mogul and Return of a King among others. The author through this book tells the story of the East India Company (EIC), tracing its history replacing the decaying Mogul Empire up to India’s First War of Independence (The British called it The Mutiny) in 1857, after which the British Crown took control. It’s the story of how the EIC became the world’s first global corporate power, financed by none other than Indian trading communities. This riveting book has incredible details that reveal how an unregulated private enterprise became a colonial ruler. Its parallels in the 21st century are there but global companies no more need armies and territories.

I CAUGHT UP WITH WILLIAM DALRYMPLE AT THE SOFITEL, MELBOURNE, JUST BEFORE THE LAUNCH OF HIS BOOK ON 30 OCTOBER, WHERE HE ANSWERED MY QUESTIONS SMILING, EXPLAINING AND WITH PASSION. HIS LUCID REPLIES MESMIRISED MY HISTORICAL CONSCIENCE.

A: Nothing unique about that. It’s very much the norm in many ways but, it’s the beginning. Where it began? It’s where corporations start. It was a new business model. It was not the first corporation, probably the fourth. In their very first charter in 1599, they got the ‘right to wage war’. By 1718 they were growing opium in Bengal, selling it illegally in China, buying Chinese tea and selling it in India and Europe. The Tea in the Boston Tea Party was exported by the EIC. This is the seed of many of our problems today.

Along the way between 1740 and 1800, they have a rivalry with the French and train 200,000 Indians. To finance that they borrow money from Indian money lenders. They conquer the whole Mogul empire. It was not just corporate violence but corporate lobbying too. It even uses corruption. In 1687 it gives the British Parliamentarians share options. So, this is the seed of many of our problems today. A warning from history.

Q: So, who are the modern parallels of the EIC?

A: Today, the biggest corporations, the Exxon or Walmart or Google or Facebook have nothing like that. There is no such example now of a company holding sovereign territory as its right. Exxon and Shell have small private armies but no corporation now does that and in parallels now they hold private guards only. It’s more subtle. Now, actually they do not need to do that. Corporations now are extremely powerful and do data harvesting. They reproduce and can target even SAT recording this interview and send advertising to it. All these are variants of the same drive. And, corporations just as humans, have the DNA to eat, reproduce and survive. They have the thrust towards maximum profits they compulsively get away with.

Q: Who are their victims now?

A: Again, it is subtler. The bulk of the book is about the history and not an act of prophecy or journalism. But I do point out the largest corporations have an inspiration for a role model in the EIC. It needs to be understood that it was not the British who ruled India from 1600 -1947 as taught in the textbooks but the British ruled only from 1848 onwards and that is only 90 years. And the company period is between 1600 and 1857, which is about 250 years, more than double the Raj. The corporate nature of that period of Indian history was a corporation, a new factor in world history.

Q: Are you condemning colonialism and the later capitalism emerging through the prism of the EIC?

A: It’s not a polemical book like Shashi Tharoor’s book and not trying to make an argument. I am trying to tell history as it happened. The book is not an argument. It’s an attempt to understand what happened. It’s been mythologized in both countries. In Britain, it’s been forgotten and ignored and have a romanticized view of our colonial encounter with India. In India, conversely, what has been forgotten is the level of collaboration.

The book tells us how that happened. How on Earth a company that did not have more than 2,000 men on its rolls and its London head office never more than 35 people got away using Indian bankers to loan money to it to train other Indians to fight as mercenaries and to build up an army of 200,000. And they were able to fight the large Indian armies of the Marathas, Tipu Sultan, and the Moguls.

I am trying to understand how and why did it happen? It’s uncomfortable for both nations. The British are quite vocal in talking about bringing civilization, democracy, and the railways. In fact, the company did nothing. What they built were very few public buildings, communications, hospitals or universities. In fact, you have two very different periods. In the company period, it is business extracting, it starts as a shipping and trading company and becomes a colonial occupier and taxes Indians to buy the investment of Silks, Kalamkari, cotton, etc. for trading.

This period is also collaborative, the money is being borrowed from financiers, the Jagat Seth, Gokul Das of Benaras and one-third of company employees are married to Indian women producing Anglo-Indians. Contrast this with the Raj proper which is not collaborative but imperialist. This period you get whites-only clubs, Cantonments and the Civil Lines. That makes the British and the Indians completely apart. But you get universities, schools and the railways. I can’t say which is worse or better.

Q: When you talk of anarchy. What exactly do you mean?

It also means the anarchy created by the EIC in Bengal. Bengal survived as an incredible industrial power with a period in history when China is overtaken by India as an industrial producer for 90 years, i.e., 1760 to 1850, mainly in textiles.

Q: Shashi Tharoor also talks about this in his book?

A: Shashi and I are on a similar turf. Though, I disagree with him on his reading of the Raj. But the two books are similar.

Q: Just like the ‘Return of the King’, The Anarchy has massive details. But there is a criticism that ‘analysis’ is missing?

A: There are tons of analysis. You only have to read in chapter 2.

Q: What was your way of working and those you use as models for writing this book?

A: It took six years, starting from 2013. I drew sources from the British Library in London and the Indian National Archives (INA) in New Delhi. There are two separate bodies to draw the texts from. London has the records of the EIC head office. And, the INA has the records which were shifted from Port Williams (Bengal) to the INA. The British Library records are, if spread, about 35 miles long.

The Mogul stuff is in Persian on the INA’s first floor. Some other documents are in libraries spread around Tonk, Patna, Rampur (Khuda Baksh Library), etc. EIC documents are easy to use but Mogul material is Persian material. The best out of it are the memoirs and histories which remain untranslated. And, in India, these days, few people read Persian. I work with a scholar who does the Persian language and I do the history part. But, it is time-consuming.

Q: Why did the Marwari bankers back the EIC?

A: It’s not new. But something hushed up. Clive going to return to Madras after destroying Chandranagar. It’s Siraj uddaula who pays him to go. The company was of a different religion, language and color so, Jagat Seth and the EIC merged as they knew the interest rates, share prices, fluctuations of the world economy, the world they both swam in. And, then the Hindu bankers of Patna, Banaras, and Allahabad, in the century that followed, made the decision to cut back with the Marathas and Moguls and go with the EIC to keep their capital safe. That’s a business decision they made.

We can criticize this decision from our perspective but they did it as a business decision, according to the times they were operating in. Just like companies do it today to prefer one party over the other. By 1780 the company is resurgent and confident. The company was very clever. The big Mogul ‘jagirs’ are broken up and then these financiers buy them and are made to become a part of the company and make the decision that the company is the lesser evil compared to the Marathas and the Moguls. We can judge them today as traitors but they thought their capital etc. was safer with the company.

Q: So, finance was important?

A: At that time India had two important financers –Indian bankers and the company itself. The EIC issued company bonds and asked the Indian financers to invest in them with a guaranteed return. So, there was no safer investment in the anarchy and then the EIC bonds. They were the dollars of those times being traded. So, the company raised money to buy arms to extend its power coming from Bengali investors.

Q: What was the role of technology?

A: Technology was a crucial factor, to begin with. Between 1700 and 1740 there were two important wars in Europe. In these wars, military technology becomes hyper just like the Atom bomb in the second world war. Both the French and the British could now train Indians in new military technology. By 1780 both the Marathas and Tipu catch up with the EIC in military technology with French support. Hence two things become crucial for the EIC – the richest territory of Bengal and the biggest financiers with them.

Q: Hindu nationalists believe the British did well by removing the Moguls? What’s your comment?

A: Certainly, Jagat Seth would say that. Jagat used the company to remove the Moguls. It’s different from the modern Hindu nationalists. Many Bengalis also have the same opinion despite the company plundering and looting.

Q: Tell me about your love for Delhi?

A: Delhi is the most maligned city in India. Calcuttans are proud of Calcutta and Mumbai people love their city, but everyone is rude about Delhi. But I love it and it is the most beautiful city. I have a beautiful farm in Mahrauli. I am so lucky. Delhi is now the centre of the arts as once Calcutta was. It’s become like New York. Three-quarters of Indian writers in English live in Delhi.

A: Another book coming out next month. It’s called ‘Forgotten Masters’ and is about the Indian painters who painted for the EIC. When the Moguls were running out of money, some EIC individuals employed these painters. Their works have never been seen. So, I am putting up an exhibition in London next month. It’s a short book mainly with pictures.