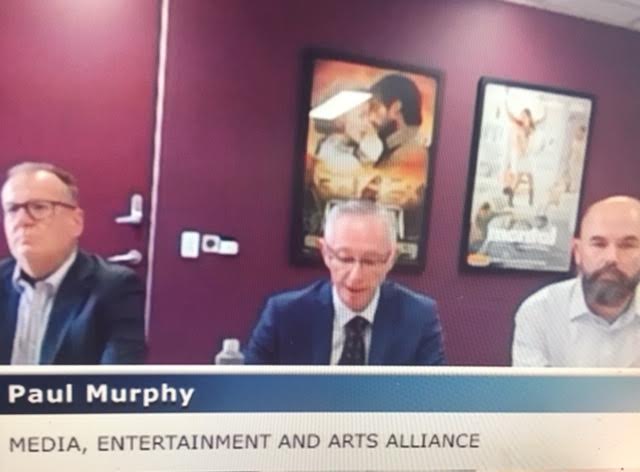 MELBOURNE, 12 March 2021: MEAA’s Green Murphy today told the Senate media diversity inquiry that the current state of Australia’s media is unsustainable with too much power vested in too few voices. New ways to support old and new media must be found to preserve democracy, he said.

In his opening statement, Green Murphy detailed the main issues which made the inquiry important as :

– the effectiveness of the News Bargaining Code is unknown, and

– notwithstanding the success of otherwise of the Bargaining Code, there are no evident support measures for small to
medium or new media providers.

He said, ” MEAA surveyed journalists across Australia about the state of media ownership and concentration in Australia in preparing its submission for this inquiry. Approximately 350 responses were received.

Twenty-seven percent of respondents rated concerns about Australian media concentration highest of all the issues canvassed, followed by funding for public broadcasting (20%), the state of local, regional, and rural media, and public trust in responsible journalism (both 13%).

Support for increased funding for the ABC and SBS was at almost 90%.

There was strong support (80%) for government action to financially support small, independent, community, and regional media outlets which may not have been the case even five years ago.

This demonstrates a growing recognition of the need for Government action in a situation where the market is clearly failing to deliver in the public interest.”

In conclusion, the MEAA emphasized that “The current state of Australia’s media is unsustainable. There are too few voices and too much power is vested in these voices.

New and credible ways of supporting the old media and the new media must be found in order to preserve the health and transparency of Australia’s democracy.

The concentration of ownership, market failures, and the grinding down of public broadcasters have combined to put our media sector in an extremely perilous place at a time when quality, reliable content is needed more than ever.”

Read MEAA submission to the Senate inquiry into media diversity in Australia.