‘Quad’ meeting wraps up, India does not mention ‘Quad’ in it’s statement 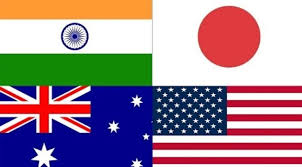 MELBOURNE, 19 December 2020: A meeting of ‘Quad’ officials from the United States, India, Australia, and Japan took place through a video conference on 18 December 2020 and “exchanged views on regional and global issues of concern interest”, says a media release from India’s Ministry of External Affairs (MEA). Interestingly, the MEA statement does not mention ‘Quad’ and instead names the four countries.

“The meeting provided an opportunity to follow up on the last such official level discussions in September 2020, and the Ministerial Meeting of 6 October 2020 in Tokyo. The officials exchanged views on regional and global issues of common interest. They also reviewed ongoing and proposed practical cooperation in the areas of connectivity and infrastructure development, and security issues, including counter-terrorism, cybersecurity, maritime security, humanitarian and disaster relief, with the objective of promoting peace, security, stability, and prosperity in the Indo-Pacific region.,” the release says. (Access India’s statement media release below)

In its media release, Australia says,” Quad partners are focused on strengthening the resilience of regional supply chains, countering disinformation, and promoting quality infrastructure investment, including in the Mekong sub-region. We are also coordinating on maritime security, cyber and critical technology, critical minerals, counter-terrorism, and humanitarian assistance and disaster relief.

As committed ASEAN dialogue partners, Quad countries resolutely support ASEAN centrality and unity. We underscored the critical role of the ASEAN-led architecture and the principles set out in the ASEAN Outlook on the Indo-Pacific in guiding the region out of the COVID-19 crisis, and underpinning longer-term stability and prosperity. We commended Vietnam’s chairing of ASEAN in 2020, and looked forward to Brunei Darussalam’s 2021 chair year.” (Access Australia’s statement media release below).

The US and Japan have also released statements separately. Quad meetings do not release a joint statement.