Why myth of western hubris, delusion of capitalist invincibility are falling apart 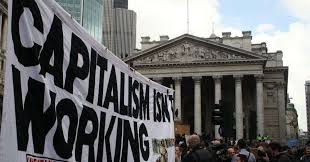 The colonial and imperialist militaries, political and economic systems are defeated by the mutilating powers of the pestilence. The COVID-19 virus is controlling our so-called modern lifestyles and quarantining ourselves within the walls of our rooms to reflect and reimagine. The ‘end of history’, ‘clash of civilizations’ and ‘there is no alternative’ were three rotten ideological theses advanced to established market-led liberal democracy.
The narratives were constructed and propagated to make people believe that the capitalist world order is the only available alternative. However, the worlds of Prof Francis Fukuyama, Samuel P Huntington, and linages of their elks come to an end as coronavirus pandemic batters the world and its capitalist economic systems. It shows the limits of capitalist globalization. It is also revealing a very frightening future with the rise of surveillance capitalism and its state apparatus.
The grandeurs of propaganda advocating the principles of laissez-faire economy promoted by capitalist globalization undermined the abilities of the states. The welfare states within capitalist frameworks have failed to perform their welfare responsibilities for citizens. The weakening of welfare states under capitalist globalization transformed basic necessities like lifesaving medicines as mere commodities in the market where ill-health is a great source of profit for the corporations.
The world is reeling under lockdowns and the death rate is increasing in the USA, UK, France, Spain, Italy, Belgium, and Netherland, whereas China, Vietnam, Cuba, Odisha, and Kerala in India have managed to contain and control the spread of the coronavirus pandemic. The myth of western hubris and delusions of capitalist invincibility is falling apart.
It is not a surprise that the capitalist states have failed in emergency response preparedness to combat the coronavirus pandemic. It shows the limits of the capitalist state and market-led healthcare systems dominated by big pharmaceutical corporations which laid the foundation for public health disasters.
The big pharmaceutical corporations consider pandemics and all forms of health disasters are opportunities for making a profit. It is clear that pharmaceutical corporations are the biggest obstacle to fighting Coronavirus pandemic.
The neoliberal illusions of capitalist globalization and its ideological roots have exhausted all its arguments. There is nothing new and liberal about neoliberal capitalism as a system in all its forms. There are attempts to expand its lifespan with the help of wars, dictatorships, and by killing liberal democracy and democratic cultures around the world.
All attempts have failed to save capitalism from itself. But capitalism continues to reinvent itself by forming new partnerships. This time, it forms alliances with regional, religious and reactionary political forces to sustain itself by spreading all kinds of hatred, risks, and fear, which led to the growth of surveillance regimes and security states.
There is a surge of surveillance capitalism after the outbreak of the COVID-19 pandemic. It is a threat to individual liberty and freedom. The digitalization citizenship reduced democratic polity as a mere number crunching exercise in electoral marathons. It can be misused by the state, governments, and corporations to control individual life as per the requirements of the capitalist structure. Prof Fukuyama might have postponed his end of history. Prof Huntington might have abandoned the clash of civilization project. Henry Kissinger’s dream of the American world order is halted for now.
It is time to write the final epitaph Prof Fukuyama, Prof Huntington and their ideological followers who swindled the progressive promises twentieth and twenty-first century by developing a system that helps few and marginalizes many. Crisis and fear are the twin weapons of such a process of a capitalist pandemic that thrives on war, dictatorships, and economic exploitation.
The death rate is increasing in the USA, UK, France, Spain, Italy. But China, Vietnam, Cuba, and Kerala have managed to contain it
The coronavirus pandemic associated with the economic crisis reveals a rotten economic and political system that treats human lives as disposables. It cannot be business, as usual, any longer. The world needs a new political and economic order. The working classes suffer the most in all public health crisis and economic crisis.
It is imperative for the working-class population to fight for their alternatives based on their common experiences and common sufferings under capitalist globalization and pandemics associated with it. The reversal of capitalist globalization is possible and inevitable.
The starting point is to nationalize health services by de-commodifying medicine and its business. The capitalist globalization offers us to choose between laissez-faire and laissez mourir. It is not a choice between capitalism and socialism. It is a choice between capitalism and life.
The experiences of the Coronavirus pandemic guide us to make a clear choice. Let’s choose life and defeat capitalism. This is the only alternative, which can help us to survive the ordeal. Our economic freedom depends on the political choices we make today for the future survival of humanity.
Nothing can stop emancipatory movements. In spite of all propaganda to socialize masses within capitalist social, economic and political order, revolutionary upsurge does not die. The human desire to emancipate from the bondage of capitalism finds news ways of expressing itself. It counters the ugly realities of everyday lives under capitalism.
The human cost of coronavirus pandemic immeasurable but it offers us an opportunity to completely destroy capitalism as a system. If we do not take this historic opportunity, our lives will continue to suffer from the everyday pandemic of surveillance capitalist state and pharmaceutical corporations. Let this pandemic be a catalyst for universal healthcare and human emancipation from all forms of illness promoted by capitalism as a social, economic and political system.
The history of revolutionary struggles for political and economic alternatives is somersault of continuous processes. It is hard to write and very difficult to predict. There is no doubt on human being’s love for reason and science, the dream of freedom and struggle for human emancipation win all the way to the end for a better future.
—
*Coventry University, UK