SAT SPECIAL: Why none is recalling national reconciliation floated by Afghan leader Najib in 1987? 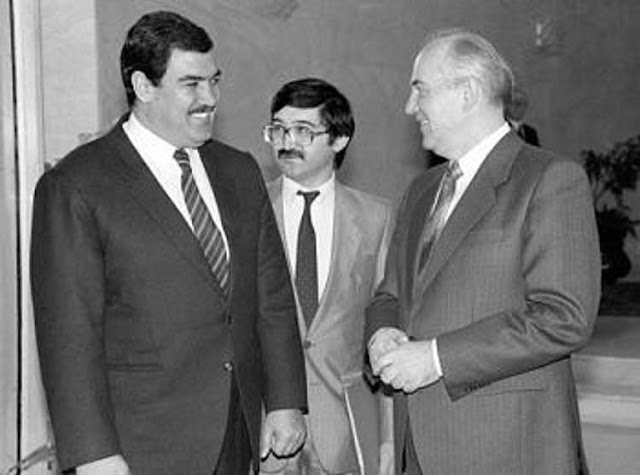 The return of the Taliban in Afghanistan has taken me down the memory lane to my Soviet days, when I was a special correspondent of the daily “Patriot” and the weekly “Link”, both semi-Left papers, in Moscow. I landed in the Soviet capital on January 23, 1986. Mikhail Gorbachev was already in command of the Soviet Communist Party after the 27th Congress – the first major event which I covered in Moscow. Already words like perestroika and glasnost were in the air, with ideas floating around that these would be applied to the foreign policy as well.

A year passed by, and I got an invitation from the Soviet information department to visit Afghanistan. I was keen, as I had already found that Gorbachev wanted Soviet troops, stationed there since 1979, to withdraw. He seemed confident that under the new Afghan regime under Najib (who later renamed himself as Najibullah), the country would implement what was called a “national reconciliation” plan by “uniting” opposing forces. Najib had announced a unilateral ceasefire in order to bring his reconciliation plan a success, and even declared, not a single Soviet soldier would remain on Afghan soil.
What particularly sounds intriguing today is, nobody talks about the “national reconciliation” plan floated by Najib, whom I met in Kabul at the end of my about week-long trip to Afghanistan as part of a foreign journalists’ group taken in a chartered plan to see for ourselves how it had begun to become operative.

The Taliban, it is being reported now, are “different” from what they were when they took over two decades ago, extreme bigots, and are also seeking reconciliation with their opponents. But compared with what Najib did, with Gorbachev help, this appears to be next to nothing.

I extensively reported about Najib’s national reconciliation, which wouldn’t have been possible without the avid support of Gorbachev. Following the overthrow of Gorbachev and dissolution of the Soviet Union, Najib lost all support. As Mujahideen took over, he resigned in 1992, and was publicly hung in Kabul by the Taliban in UN premises, where he lived, in September 1996.

It was an extremely wintry day in early January 1987. It was minus 28 degrees centigrade Moscow, perhaps worse. I got a phone call from the Afghan embassy to get my passport stamped if I wanted to go to Kabul. Packed with all the necessary clothing, I went out, took the trolley bus just outside my residence at Ulitsa Chkalova. Freezing in the bus, I got out, went into the nearest metro station, Taganskaya, sat there for a while to warm myself up, and returned to my home, walking. It wasn’t very far.

The next day it was minus 15, better, and though very windy, intolerably windy, I decided to take the trolley bus to reach the Afghan embassy, braving the icy particles smashing on my face. I got my passport stamped with an Afghan visa. Organized by the Soviet information department, a planeload of foreign journalists were flown to Kabul, if I remember the date correctly, on January 14, 1987.

All Moscow-based top newspaper and TV journalists, whether from the US, Britain, or Japan, but very few from the third world countries, were taken to Kabul. I was the only one from India. There was a journalist from Pakistan, too. The plane, an Aeroflot, hovered around on the airport, and after taking a few circles, up in the air, landed at the airport.
Journalists suspected this was because the authorities at the airport wanted to make sure that the rebel forces – called Mujahideen – did not strike at the plane, perhaps equipped as they were with US-made ground-to-air missiles. Taken to the hotel – I don’t remember the name – in a bus, which had an educated English-speaking guide, the next day, during breakfast, I was asked by a Japanese correspondent whether I heard or saw or heard Mujahideen firings at night. I hadn’t.
For the next three days, we were taken to different spots in Kabul, including the market and the mosque areas, to see for ourselves how life had returned to normal. Press conferences organised to tell us that the Mujahideen were lying low and were losing ground, and the government under Najib was in negotiation with different political forces in the country to bring about reconciliation, which would ultimately lead to the withdrawal of Soviet forces.

Still glued to my Communist past, I seemed impressed. I interviewed anyone who knew some bit of English or Hindustani/Urdu. Bollywood films were very popular, and most people could speak in a highly Pushto-ised Hindustani. On the third day we were taken in an Afghan military plane to Jalalabad, the next major Afghan city, where we were shown different spots to see how things had been turning normal and there was no Mujahideen threat.

The market in Jalalabad, interestingly, had textile shops run by Sikhs, and I got interested in talking to them. They knew no Hindi, and only spoke in Punjabi. Talking with several of them, I could gather from them that they were happy that a national reconciliation plan would be in place and things might return to normal. 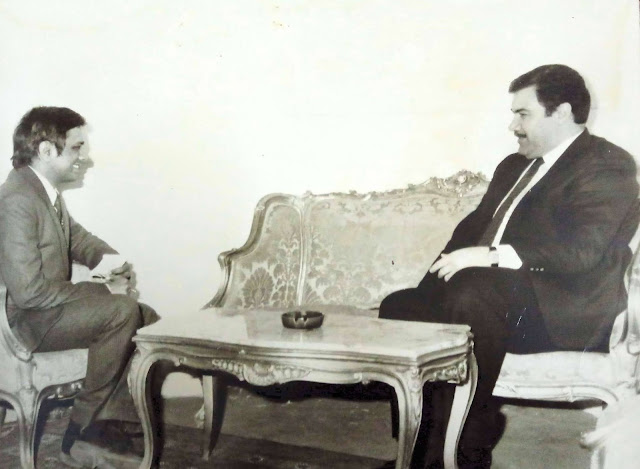 Taken in a bus from Jalalabad to attend a couple of or three meetings of tribesmen, who we were were free to move around between Afghanistan and Pakistan, I found a large contingent of Soviet tanks lined up with Afghan soldiers atop.
Returning from the borders with Pakistan, one could hardly see any any Soviet soldiers, except at the Jalalabad airport. Not that Soviet soldiers weren’t there: Unarmed, I could see them bargaining at Jalalabad bazaar for some titbits. They seemed to give the impression that they wanted to withdraw from Afghanistan.

Back to Kabul on the same day evening, again in an Afghan military plane, we had a press conference with President Najib. I applied for a separate interview with Najib. A day before we were to depart from Kabul, I was taken to meet him. He spoke in Hindustani with a Pushto accent, shook hands, and hugged me rather tight. Lean and thin, I felt very frail. I asked him a few questions, especially how he saw national reconciliation, whether it was similar to Bulgarian leader Georgi Dimitrov’s United Front, meant to combine forces to fight fascists in the late 1940s.

“The highly educated, Najib was Gorbachev favorite, why he was installed Afghan president despite opposition from within Soviet Communist Party”

Najib told me it wasn’t the same, but asked me to give him a list of questions, answers to which he would post to me to Moscow. At the airport, I was approached by an Afghan official to hand me over my photograph with Najib and assure me I would soon get answers to my questions. I didn’t file any story while in Kabul, so but back home, I filed three stories – all of which were taken on the edit page, (one of them I have still preserved), apart from an exclusive interview with Najib.

What I observed in Kabul and Jalalabad was interesting: Though Najib told me that his national reconciliation plan wasn’t easy enough, as it meant uniting different political forces, including the two factions of the Left-wing People’s Democratic Party of Afghanistan (PDPA), Khalq and Parcham, which had alternatively ruled the country and were at loggerheads, and interaction with a cross-section, including traders, workers, tribesmen, government officials and PDPA cadres in Kabul and Jalalabad revealed that it did held out hope.

Wasim Siddiq, a party cadre in his mid-1930s who had lost two of his relatives during the violent past, told me, “We are all tired of this war. We want peace. Both we and those who are in the opposition camp.” According to him, people had become politically more conscious, even illiterate peasants would listen to radio stations – Kabul, Moscow, Islamabad, BBC, Voice of America. They wanted to be better informed, looked forward to the days when large number of refugees – about 1.5 million – who had fled to Pakistan would return to Afghanistan.

In Kabul, I was told by head of the Afghan chamber of commerce – whom I met in the hotel I was staying – how under Najib business could flourish if his offer for peace was successful. A similar sentiment appeared to prevail in Jalalabad, where a cloth merchant told me, people wanted peace, wanted to utilise the opportunities offered by the government to develop trade and business. At a jirgah near Jalalabad, the tribesmen spoke loudly that “enough blood” had been shed, hence they wanted peace so that they could move around freely between Pakistan and Afghanistan. 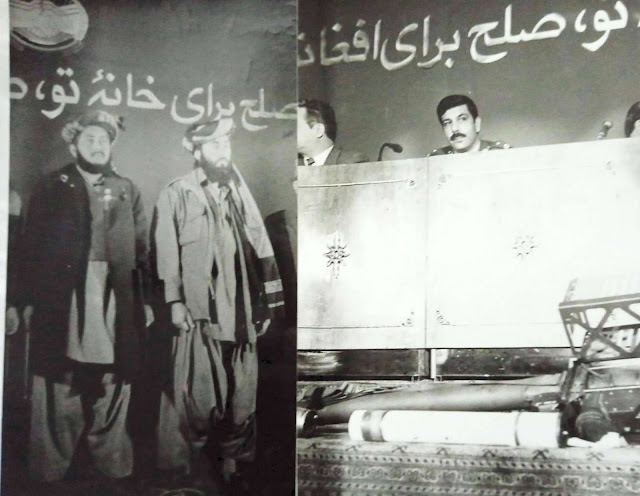 Afghan rebels (left) at a press meet with Defence Minister.

Even as I was in Kabul, sections of Afghan opposition that were at war with the then Afghan government seemed keen to give up arms. Officials told me, about 2,000 armed men surrendered their weapons on January 18 and signed a peace protocol in Herat province, and this had become a “regular feature” in Afghanistan. One Ishhan Bahbah of the Baghban province and three other rebel leaders, Mohammad Ahmed Yaqubi, Nasiruddin Amin and Nizamuddin Wahdad, addressed a press conference. Wahdad, we were told, had returned from Pakistan, from where he was fighting.

No doubt, Najib faced a Herculean task: The armed rebels were an estimated 70,000 strong, but what I failed to understand as to why was the US supporting the Mujahideen, who were bigots of the worst type. There was enough reason to give Najib a chance. Indeed, Najib’s reconciliation plan was strongly progressive in a feudal-tribal setup.
It consisted of mutually acceptable dialogue and rational compromise, a multi-party system, membership to ‘any patriot’ in the National Front mass organization, accommodation, and land, education for children, employment in their previous places of work, including to servicemen, pardon to army officers who had deserted and prisoners, except those who involved in criminal cases, tax exemption and loan from agricultural development bank on easy terms, etc.
Himself highly educated, after studying at the Habibia High School in Kabul, Najib, who was a Gorbachev favorite, one reason why he was installed as Afghan president despite opposition from within the Soviet Communist Party, went to St Joseph’s School in Baramulla, Jammu and Kashmir. At Kabul University he completed Bachelor of Medicine and Bachelor of Surgery (MBBS) degrees in 1975, though soon thereafter he joined politics.

* Rajiv Shah was a Special Correspondent of ‘Patriot’ daily and ‘Link’ weekly published from New Delhi, India in the 80s. Later he was with the Times of India in Gujarat.