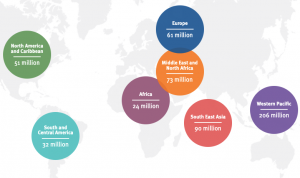 The 141 pages Atlas is online and a mine of information. 463 million people between the ages of 20 and 79 suffered from diabetes worldwide in 2019. This represents 9.3% of the world population in this age group. The total number of adults with the disease is projected to increase to 700.1 million (10.9% of the global population) by 2045.

The regions with the highest shares of adults suffering from the disease are North America and the Middle East. South Asia – where diabetes cases are growing at one of the fastest rates – is set to nearly catch up with Western Asian and Latin America by 2045.

The Atlas clearly spells out that diabetes is one of the fastest-growing global health emergencies in the 21st century.

– Diabetes is a serious, chronic condition that occurs when the body cannot
produce enough insulin or cannot effectively use the insulin it does produce
– Type 1 diabetes is the major type of diabetes in childhood but can occur at
any age. It cannot be prevented. People with type 1 diabetes require insulin
to survive
– Type 2 diabetes accounts for the vast majority (over 90%) of diabetes
worldwide. Evidence exists that type 2 diabetes can be prevented or delayed,
and there is accumulating evidence that remission of type 2 diabetes may
sometimes be possible
– ‘Prediabetes’ is a term used increasingly to describe people with impaired
glucose tolerance and/or impaired fasting glucose. It indicates a higher risk
of developing type 2 diabetes and diabetes-related complications.
– Pregnant women with gestational diabetes can have babies that are large for
gestational age, increasing the risk of pregnancy and birth complications for
the mother and baby

What are Russia’s Immediate Objectives in Ukraine: Part 1