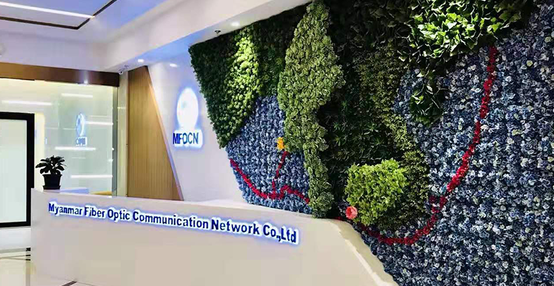 MFOCN built Myanmar’s largest commercial fiber optic telecommunications network, which now consists of over 27,000 km of a national fiber optic backbone and an urban network of over 2,200 km. The company leases parts of this network to various companies, including Mytel. Mytel, a mobile operator controlled by Myanmar and Vietnamese military-owned businesses, is a source of revenue and technology for the Myanmar military. MFOCN has also sold fiber optic cables to Mytel.

‍How are the AIIB and World Bank exposed?

The AIIB was established in 2015. Initiated by China and headquartered in Beijing, the bank now has 103 approved members from across the world. AIIB’s financial support for MFOCN is channelled through a financial intermediary, the Asia Investment Limited Partnership Fund (AIF). This fund was established with an initial commitment of US$500 million from China’s Ministry of Finance. The AIIB approved a US$75 million equity investment in the fund in 2019, and with investments from other undisclosed actors, the fund achieved financial closing in 2020 with over US$1.5 billion in capital. The Fund is managed by a subsidiary of AIC Holdings Ltd, a private firm registered in Hong Kong. The fund has invested in MFOCN and its sister companies in Cambodia and the Philippines.

In addition, the Multilateral Investment Guarantee Agency (MIGA) of the World Bank Group has guaranteed three loans to MFOCN totalling more than US$335 million from Bank of China and ICBC. 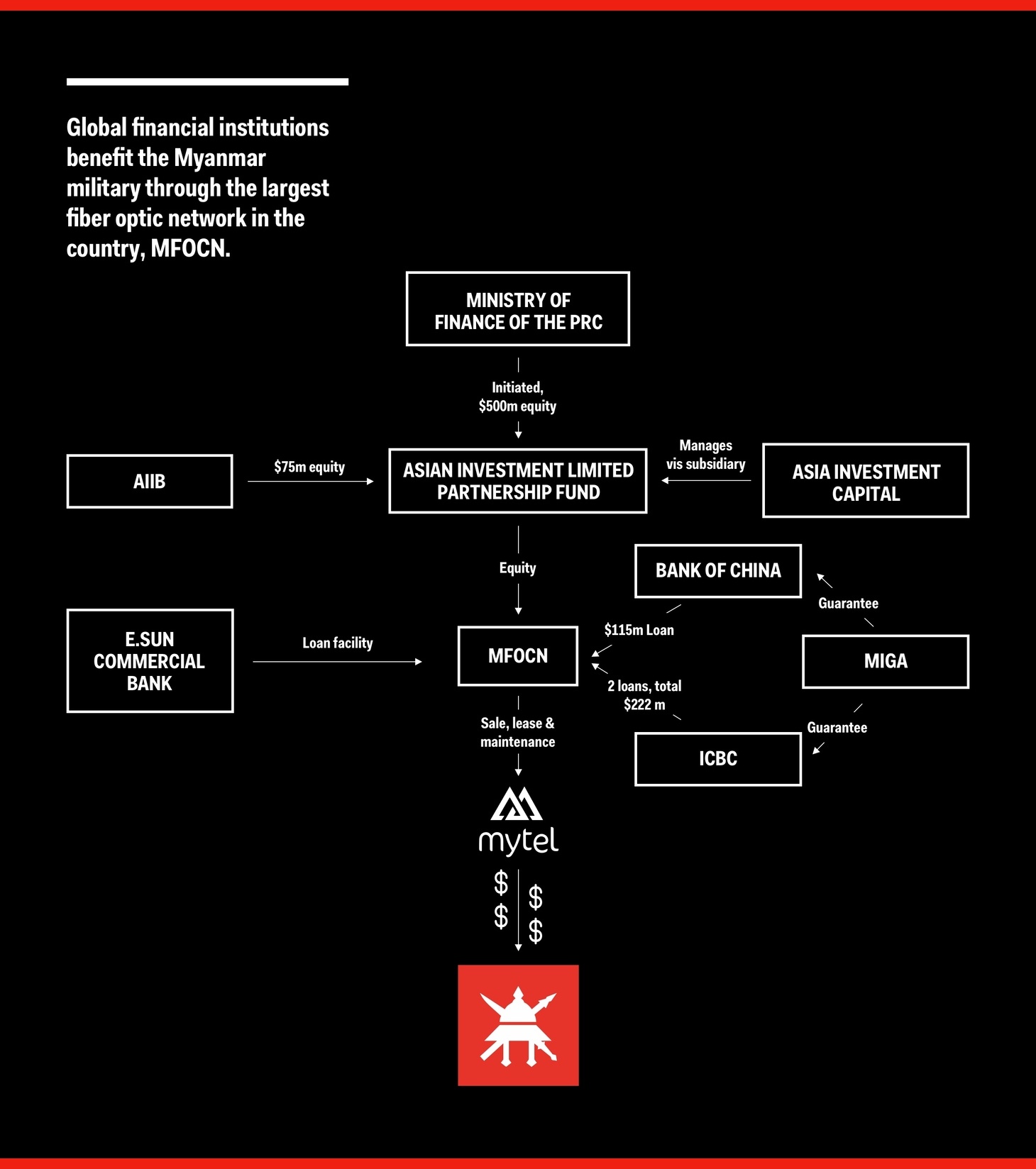 MFOCN entered Myanmar in 2012 at the beginning of the military’s limited democratic transition, signing an agreement with the communications ministry under the military’s then proxy government. Ministry data shows MFOCN planned a fiber network of over 30,000 km nationally.

MFOCN’s business model has been to build its fiber network, then sell or lease fiber to mobile and internet operators. Documents inadvertently leaked by Viettel Construction Myanmar show Mytel’s use of MFOCN infrastructure as part of their network operations. Mytel utilises MFOCN’s network around the country, supporting its rapid rollout and profits.

In September 2017, as the military’s campaign of genocide against the Rohingya was taking place, MFOCN signed a contract with Mytel for the sale of optical cables. After the warranty period is over, MFOCN charges an annual maintenance fee. A leaked Viettel Construction cable incident summary document shows that MFOCN teams maintain parts of Mytel’s own fiber optic cable network, which may be part of its after-sales support. The document showed MFOCN responding to Mytel cable incidents in Mandalay, Sagaing and Tanintharyi.

MFOCN’s commercial relationship with Mytel raises serious questions for the AIIB, MIGA and their country shareholders. The UN Independent International Fact Finding Mission on Myanmar’s report into the business interests of the Myanmar military concluded that the military’s businesses support their international crimes. It recommended that “no business enterprise active in Myanmar or trading with or investing in businesses in Myanmar should enter into or remain in a business relationship of any kind with the security forces of Myanmar”, specifically naming Mytel.

Mytel is a major asset for the military. According to profit projections Mytel submitted to the Myanmar Investment Commission, leaked by Distributed Denial of Secrets, Justice For Myanmar has calculated that Mytel will incur losses for the first four years of operations while it builds its infrastructure, after which the Myanmar military could earn more than US$700 million over the following decade. Mytel is clearly a major and strategic business for the Myanmar military. 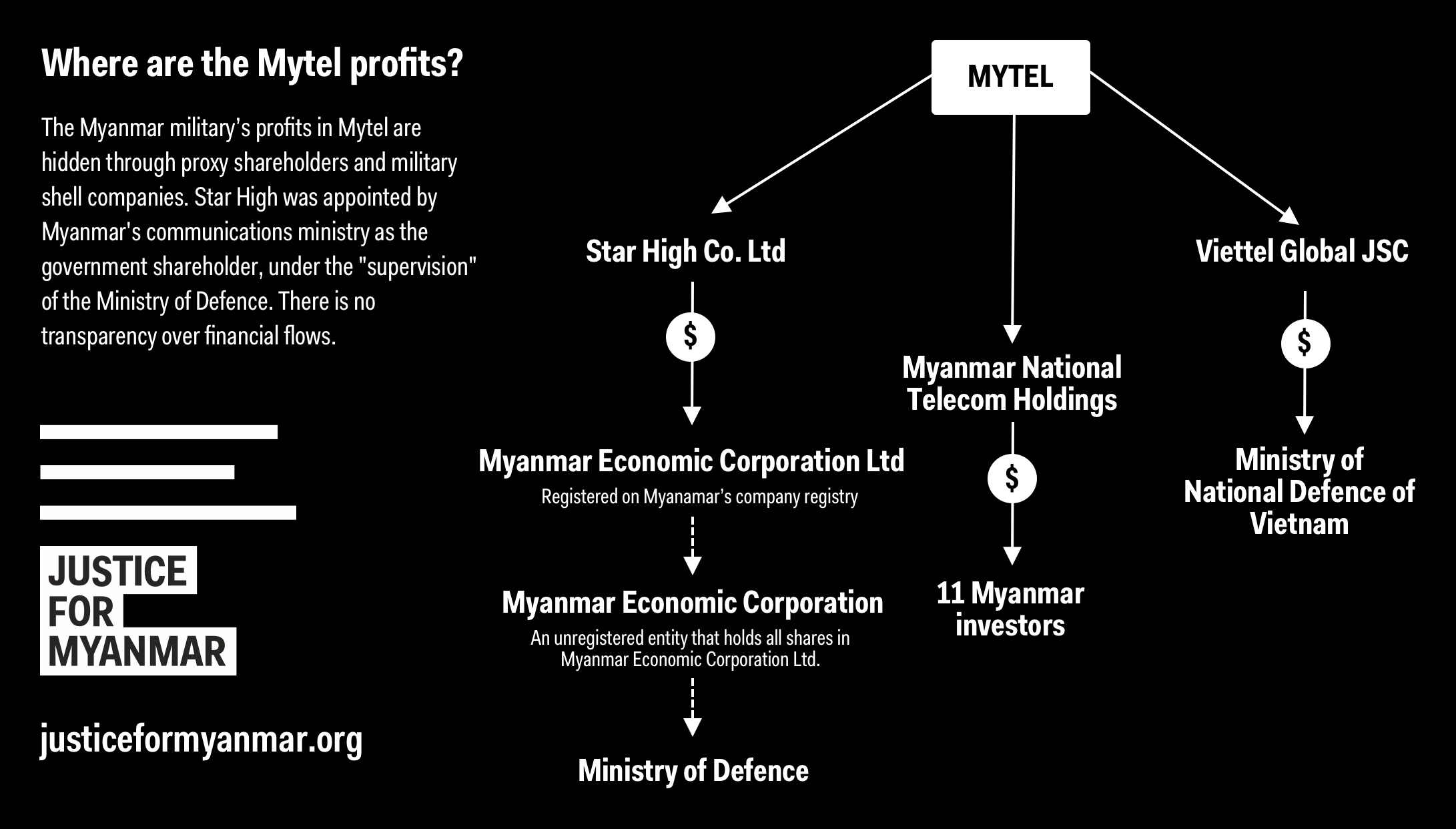 In addition to its business with Mytel, MFOCN is renting office space in Golden City, a real estate development in Yangon on land leased from the office of the army’s quartermaster general. The developer, Emerging Towns & Cities Singapore, suspended trading in February after the Singapore Stock Exchange initiated regulatory action following a Justice For Myanmar investigation.

MFOCN’s murky ownership
MFOCN is owned by two Singapore holding companies, which are both ultimately wholly owned by HyalRoute Communication Group, a shell company registered in the Cayman Islands. Shares in HyalRoute are held through 29 holding companies, most of which are in the British Virgin Islands, the Seychelles and the Cayman Islands, which are well-known tax havens. This structure makes it exceedingly difficult to identify the ultimate owners and raises serious concerns over transparency.

One key shareholder is Kuang-Chi Group, which acquired a 7.5% share in HyalRoute in 2020 by investing US$263 million in a series of linked shell companies located in the British Virgin Islands. Kuang-Chi is a Shenzhen-based tech firm operating in defence, including manufacturing stealth and surveillance technology. In December 2020, the US imposed export restrictions on Kuang-Chi Group for enabling “wide-scale human rights abuses within China … and/or facilitated the export of items by China that aid repressive regimes around the world”. Other shareholders in HyalRoute include majority Chinese state-owned commercial bank Everbright.

What needs to be done?

Both the AIIB and MIGA have environmental, social and governance polices that apply to their investments. Both the AIIB and MIGA should have conducted due diligence on their investment, which in the context of Myanmar should have included enhanced due diligence to ensure that there was no exposure to military-linked entities. Investment in and support for MFOCN should never have been approved while the company is in business with Mytel.

Since the brutal and illegal February 1 attempted coup, the military has murdered more than 870 people and arrested over 5000 in an escalating campaign of terror. The military has used telecommunications as a weapon, conducting surveillance, shutting down the internet and creating a pervasive system of censorship. MFOCN is complicit in these abuses through its business with Mytel and its military owners.

In February, 218 civil society organisations from Myanmar and around the world sent an open letter calling on International Financial Institutions to immediately freeze loans and other financial assistance to Myanmar. Signatories demanded that IFIs recall loans linked to the junta and military companies, and reassess engagement to ensure they do not benefit the military.

After the attempted coup, the World Bank Group announced that it had put in place “enhanced monitoring” of projects already underway in Myanmar and suspended disbursements, but it is unclear how this applies to the types of loan guarantees provided by MIGA in this case.

Alarmingly, the AIIB has published no position on Myanmar since the attempted coup. In May, the Financial Times published an article saying that the AIIB “leaves door open” to future investment in Myanmar. The bank publicly pushed back on this headline saying it was misleading, but has still failed to make any clear and unequivocal public statement on its position after the coup.

Both institutions include shareholders who have implemented sanctions against the junta and its conglomerates, yet the lack of clear commitments from multilateral institutions they are members of risks undermining these actions.

The lack of action from AIIB and MIGA since the attempted coup is unacceptable. Justice For Myanmar calls on AIIB and the World Bank Group to immediately suspend support for MFOCN and urgently investigate all ongoing and proposed investments and guarantees in Myanmar, whether direct or via intermediaries, to prevent projects from benefiting the Myanmar junta and its conglomerates. Shareholders must ensure the AIIB and World Bank Group do not profit from military-linked business activities. We further call for a halt to any new investments until democracy is restored, with the military under civilian control.